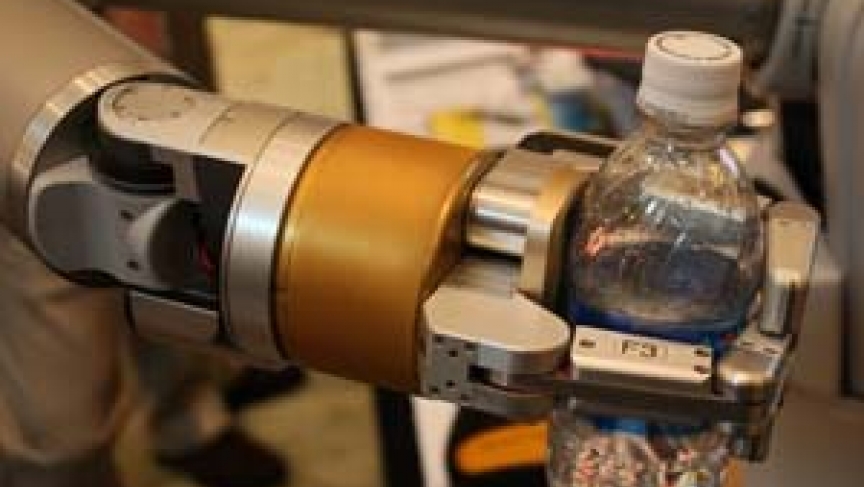 "The World" anchor Marco Werman speaks with technology correspondent Clark Boyd about the latest in the world of robotics showcased at the Robo Business 2009 Conference and Expo in Boston.

Robots are, increasingly, a key part of lives, at least in the developed world. In homes, they're even vacuuming our carpets. Robots are also in hospitals, where they're helping doctors perform delicate surgeries, and in war, remote controlled 'bots are at the forefront of dangerous tasks like bomb disposal and cave clearing.

Boyd on the trends in global robotics at the Robo Business 2009 Conference and Expo: "Well, it was really interesting, Marco. If you're talking about a personal assistant kind of robot market that may be used to help the elderly with various tasks around the home people are thinking that that market might be worth about 17 billion dollars by 2010. While the military market is already worth about 500 billion.

"Which kind of puts things in perspective ... you know, they're already being used in conflicts right now and there are just more and more of that kind of thing coming online all the time."

According to Boyd, military robots are currently not doing the fighting in wars, but that could change: "Well, now, these aren't armed robots. Most of what we're seeing being used by the US in Iraq and Afghanistan are remote controlled bots. There's a new one that's out there right now that's going with infantry units into buildings to help them clear it. Somebody can remotely see where everybody is and what's going on. Having said that, there's one company called QinetiQ that already has taken their robot and put a gun on it. And I talked to the head of the tech solutions group at QinetiQ, his name is Ed Godere, and I asked him; so, what about this idea of armed robots making decisions for themselves, without anybody controlling them?"

Boyd: "I should note, Marco, that the office of naval research shares Ed Godere's concerns there about armed autonomous robots out there making life and death decisions. They actually produced a paper quite recently that argued that that might go against all the laws of warfare as we know them."

And powering the robots is still an issue to contend with says Boyd: "Well, it was very clear walking around the expo floor in Boston, everybody's switching out the batteries every, you know, couple of hours on these machines. Power is a huge issue. I did an interview with Brian Zenowich who was with an outfit called Barrett Technologies which is based right here in Cambridge Massachusetts. They're making these really neat robot arms that can do a variety of tasks, and I asked him about how the power problem affects his design work."

Zenowich: "It's one of the most difficult design considerations given today's battery technology. I mean, what we try to do from the ground up is design the robot so it draws as little power as possible knowing that the battery technology is going to take many, many years to catch up."

As for robotics in other parts of the world, Boyd says: "Well, I think the general consensus is that it's still out of reach for a lot of people. One of the interesting things I was trying to, obviously because I work for "The World," I'm down there trying to get a sense of who else in the world is leading the way on this. Japan, of course, is huge in this regard. Companies like Toyota are thinking about having assistive robots in their car show rooms by 2010. But it's Korea that everybody's looking at because the government is pumping a lot of money towards robotics. Just like they pumped a lot of money toward broadband and IT."