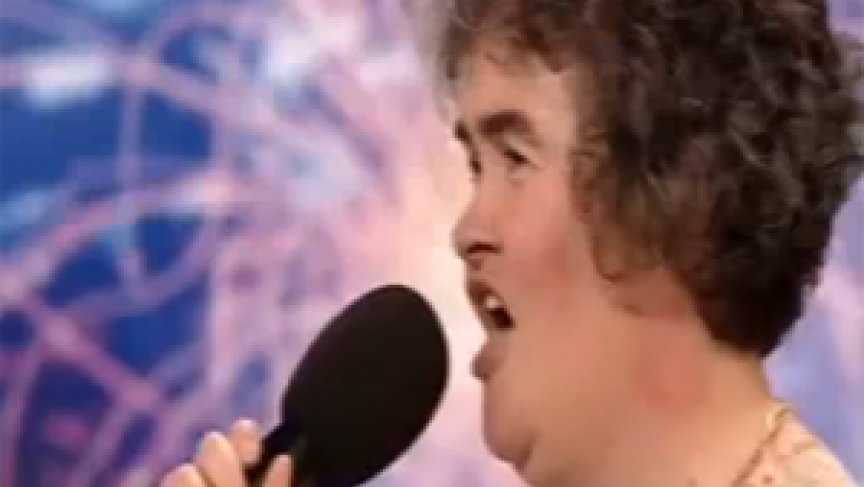 Is there anyone who doesn't know about Susan Boyle, the Scottish woman with the beautiful voice?  Perhaps somewhere in the far reaches of the Amazon.  It seems Susan Boyle has been everywhere since wowing the judges of the TV show "Britain's Got Talent."  The question is, 'Where is she from?'  We'll pay a call to the manager of the Happy Valley Hotel in Scotland.

Marco Werman: Hello, Jackie Russell? This is Marco Werman from PRI's "The World"  in Boston.  You are on the radio right now.

Werman: Tell me the name of your town, the town that's been so quickly made famous by Susan Boyle.

Russell:  It's called Blackburn, in West Lothians.  It's a small village with 5,000 people in it.  Everybody knows everybody.

Werman:  So, it's Friday night in the pub there, at the Happy Valley Hotel.

Werman:  What are people talking about?

Werman:  Do you know Susan?

Russell:  Yes I do.  Yes, she comes into the pub regularly.

Werman:  When was the first time you heard her sing?

Russell:  Oh, it must be about twenty years ago now.

Werman:  Did you know the first time you heard her sing that she had talent?

Russell:  Oh yes.  Everybody in the village knows that Susan can sing, yes.

Werman:  Has she been in today?

Russell:  No.  The last time she was in, it was on the television on Saturday for the first time, the actual show, and she popped in on the Sunday after.  And, unfortunately, we haven't seen her since because she is a bit inundated.  There is people camping outside her door and everything now.

Werman:  When Susan Boyle was asked to describe her reaction to all of this sudden attention she said, "Gobsmacked.  Absolutely gobsmacked."  What does that mean?

Russell:  I don't actually knwo if it is a Scottish saying or if it's a British saying.  It means that she is dumbfounded, basically.

Werman:  It's like you got socked in the mouth or something.

Werman:  How do people in Blackburn feel about this invasion of their privacy?  Tell me how many television crews and trucks are parked in your town right now.

Russell:  Oh, there is just hundreds.  We've had people from all over the world.  That telephone has never stopped.  And, we've had people from South Africa, New Zealand, Australia, everywhere; it's just unbelievable.  The people are very excited for her.  But it's a bit of a surprise the way it's just become such a phenomenon, really.

Werman:  And Jackie, what is your favorite song that she sings?

Werman:  Now, apparently, with all of this media attention, Susan Boyle has done something like sixty interviews, at least, with media outlets from around the world.  Is she going to lose her voice from all of this talking?

Russell:  No, No.  Susan sings constantly.  I think if she was going to lose her voice, she would have lost it long before then.  She is a very quiet, shy, unassuming girl, but she is a lovely girl.  She's just a local village girl, and she is a really, really pleasant girl.

Werman:  I was going to ask you, when she comes in the pub, is she chatty?

Russell:  Yeah, she'll chat to the locals she'll come in herself and order her glass of lemonade, and then go back off to her house again,

and things like that.  It's very much a local community here.

Werman:  When do you think Blackburn is going to return to normal?

Werman:  And when she does win it, what kind of homecoming are you going to give her?

Russell:  Oh, the place will be just, oh, I wouldn't even like to think...as I say, it is just a small village.  And I imagine that people from around the surrounding villages will come out and welcome her home and that, you know?  We'll be all just so pleased.

Werman:  Jackie Russell runs the Happy Valley Hotel in Blackburn, the home of Susan Boyle, the big talent from "Britain's Got Talent."  Thank you very much, Jackie.

Russell:  You are very welcome.  Nice to speak to you.

Werman:  Any rooms left this weekend for the Happy Valley?

Russell:  We only have the four rooms, and they are pretty booked out at the moment.  Bye-bye, now.