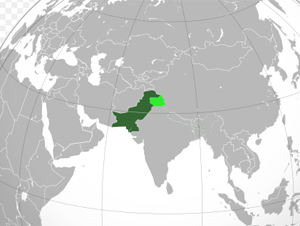 Pakistan is where a pair of musicians are writing songs of protest with inspiration with poets of the past. The band is called Laal – that’s the color red in the Urdu language. The World’s Laura Lynch spoke with Laal’s lead singer, Shahram Azhar about the group’s mission and music.

The mix of old poetry and new music is the hallmark of Laal. Shahram Ahzar calls it a natural fit. Laal wants change in Pakistan; so did the country’s iconic poets.

"That is precisely why we thought we could use their poetry. We could use their poetry to re-sing it in a manner, because for the past two decades new artists and musicians have not really wanted to sing these poets. Either they thought it wasn’t something profitable or people didn’t want to listen to this poetry anymore. And that is precisely the reason why we entered this industry."

But musicians need audiences – even self-styled protest musicians like Azhar and his partner, Taimur Rahman. And they weren’t drawing the crowds they wanted to hear their message.

"We failed, essentially. Not many people heard about us or what we wanted to do about our country – what our aim was, what we believed in. So we decided we should make a temporary compromise."

They signed on with a corporate media company, made a CD, and recorded a video. That’s when things started to change. The crowds got bigger, and this is the song many called out for. The song is actually a poem written by one of the leaders of Pakistan’s lawyers’ movement. The lawyers took to the streets two years ago to protest former President Pervez Musharraf’s decision to fire the country’s Chief Justice. The protests continued and when the Chief Justice was finally re-instated this month, the song became an anthem of victory.

"Two years ago, Musharraf forced the Chief Justice to resign and he didn’t. He refused. And then began a heroic movement of the lawyers in Pakistan. It ends on the note that – he says that [line from song]. That means he’s challenging the military dictator by saying, “No matter what you do, the Chief Justice will be restored. The lawyers will be restored.” And that is exactly what happened."

Azhar and Rahman aren’t giving up their day jobs. Both are university teachers working on their PhDs. But they’ve taken their passion for political activism and music and transformed it into something both traditional and modern.

"Basically, I was inspired by John Lennon. “Imagine” is one of my favorite songs. We are revolutionary musicians. Bob Marley, John Lennon – these are the people that inspired us. But our band is purely a political band because that is the only poetry we sing. We don’t really sing love songs. It’s primarily a fusion of north Indian classical music and western jazz. Blues and jazz."

The poets of decades past often found themselves jailed for the words they wrote. Azhar says he, too, has been arrested and threatened for taking part in political protests, though never for his music. Even as the group grows in popularity, Azhar claims they won’t forget what drove them in the first place. Any profits they make, he says, are going to build new girls schools to replace the ones the Taliban are destroying in the lawless tribal lands of the country.