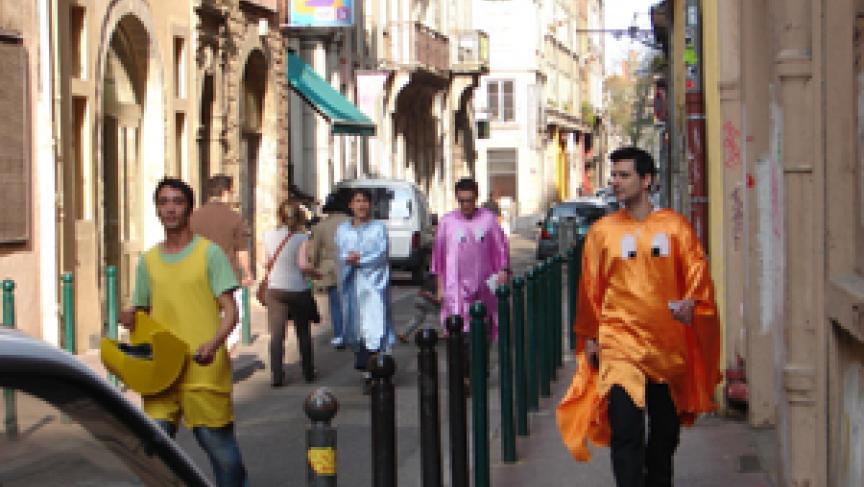 We’re going to take you now back to the 1980’s, for a few seconds. You may or may not recognize that sound. PacMan -- it was that little yellow arcade hero who munched dots while being chased by four ghosts. In 2004, some grad students in New York created a real-life version of the game on the streets of Manhattan. That effort seems to be “Game Over” for now, anyway. But some students in France have quite literally taken the idea and run with it. It’s called “Urban PacMan”. Cyrus Farivar reports from Lyon.

Clement Chaine stands on a chair in a local game club here in Lyon. Gathered around him is a group of 20 college-age men and women. Chaine is the organizer of Lyon’s version of Urban PacMan. Clement reminds everyone of the rules. There are two teams: Pacman’s team and the Ghost Team. Now, Pacman’s job, he says, is to get the highest score. Many in this group played Pacman as kids. That’s hardly surprising. It was one of the most popular arcade games in the world in the 1980’s.

In the video game version, one player controls Pacman. You maneuver Pacman through a maze filled with dots. You try to eat as many dots as possible. That’s how you score points. Pacman is chased by four ghosts. But Urban Pacman is a bit different. The streets of Lyon became the maze, and real people take on the roles of Pacman and the Ghosts. Again, Clement Chaine.

In other words, the Urban Pacman and each Urban Ghost are paired with someone on a computer. The person on the computer is called a controller. The controller stays in touch with their “street double” by cell phone. As the ghost, or Pacman, runs around the street, they have to say to their controller which streets their running down and whether they’re turning left or right. The controllers then plot out the action on their computer screens, creating a kind of slow-motion version of the original game.

"When one of the ghosts in the street spots Pacman, when he sees him, he warns his controller in the computer and he tells him, ‘Yeah, I think Pacman is there,” so there’s a kind of team play between the ghosts."

The whole idea is to make the on-street version as true to the video game experience as possible. “Do you know where Pacman is?” asks Melanie Julien, a telecommunications student. She’s playing one round of Urban Pacman as a ghost. And when I say “ghost”, I mean, she’s actually wearing a big, brightly colored orange robe just like the ghosts in the video game. Pacman, meanwhile, wears yellow gym shorts, a yellow tank top, and a bike helmet that’s been converted to look like the real Pacman shape. Julien checks in with her controller.

"I’m going to wait a minute. He ate Pinky! She was just below me a moment ago. Okay. Oh [expletive] I just got eaten! I’ll be right there."

And with that, because Pacman tagged her, Melanie Julien has to go back to the beginning. Now, you may ask, “Why bring a video game to the streets?” Because it is pretty fun. Even though when I played as Pacman, I didn’t even last four minutes. But the point is that I had a blast doing it.

Organizer Clement Chaine says he’d love to have urban Pacman spread around the globe and possibly even have city-to-city competitions. But for now, it’s only here in France. The next match is set for the first Saturday in May.