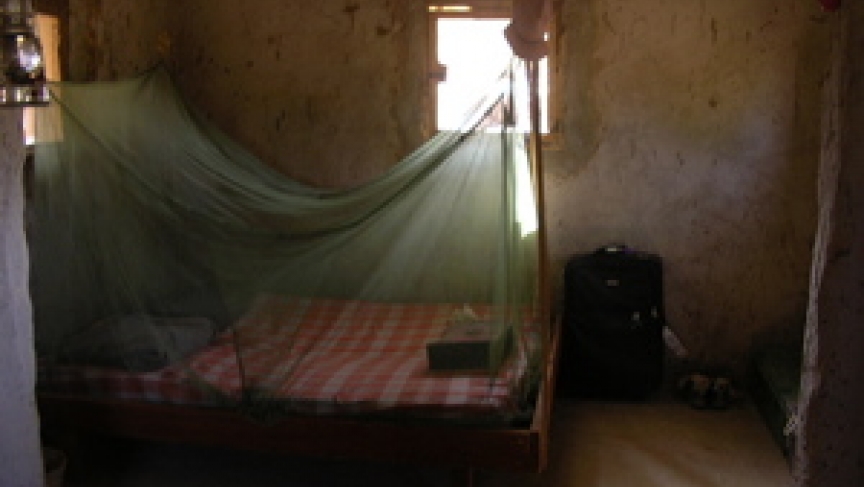 Mosquito net in a home in Mali (Image: delayed gratification/Flickr)

Even in the middle of this financial crisis, President Obama and other world leaders still find money in their budgets for foreign aid. In fact, some would argue it’s vital to continue giving financial aid to poor countries at a time such as this. Dambisa Moyo goes the other way. She’s an economist from Zambia, in southern Africa. And in her book “Dead Aid”, she makes the case for stopping all aid to Africa, except for humanitarian and emergency relief. Anchor Katy Clark of "The World" spoke with Dambisa Moyo.

Moyo believes stopping the aid would actually spur economic growth on the continent. She says as it is right now, foreign aid only exacerbates Africa’s problems. "There is a consistent flow of evidence over the past 60 years that aid has not gone to support productive investments, and rather it’s gone to support despotic and tyrannical leaders across the continent. But corruption’s just one of the problems. I think the most fundamental problem is that aid disenfranchises Africans, and in that sense it means governments are not accountable to Africans. They spend their time courting international donors who basically pay their livelihoods."

And it’s not just corrupt leaders. Moyo talked about a mosquito net maker in Africa who is put out of business when some Hollywood star-type rallies the masses to send 1,000 mosquito nets to a malaria-infected part of Africa. For Moyo there are better alternatives. In the book she talks about the need for government to focus on trade, and not with the traditional partners of Europe and the United States, but with emerging economies like China.

"Places like China with 1.3 billion people and 7 percent arable land are desperate to feed their populations, and Africa provides the support for those type of goods. I also talk about foreign direct investment. African government needs to do a lot to actually bring in and attract foreign investors. I also talk about the bond market. Yes, we are undergoing very great challenges in the current bond system in the United States and Europe, but I think it’s going to be important for African governments to look to alternative non-traditional markets such as China and the Middle East where they still have a lot of pockets of money."

One alternative theory out there is that aid works -- it’s just that rich countries haven’t given enough of it yet. Moyo says that aid has worked in times when it was short, sharp, and finite.

"There is not a single country on earth that has achieved economic development and eradicated poverty while relying on aid to the degree that African countries rely on aid. And beyond that, I would say that why are we trying to push a product that not only has it failed, but we actually know the things that work. It seems to me why should we try to do something different from what China has done or what India has done or what South Africa has done? Why is there a different prescription for Africa? My fundamental perspective is that the whole aid industry is built on a sense of pity for Africa."

Moyo believes injecting capital into Africa for infrastructure development can work now despite the current state of financial markets. "I think now is a great opportunity for innovation. I think there are places like the Middle East, as I’ve said, not only would they be interested in doing business in Africa even in these markets, they are doing business in Africa even in these markets. Africa is expected to grow at 3 percent this year. This is IMF forecast. The rest of the world is maybe in totality at 0.5, many countries growing in a negative GDP growth. So Africa has a little good story to sell. You know 3 percent growth rates in this environment? A lot of people will sit up and listen to that."

Dambisa Moyo grew up in Zambia. She’s worked for Goldman-Sachs and The World Bank. And her book is called “Dead Aid: Why Aid is Not Working and How There’s A Better Way for Africa.”

Listen to Part 2 of PRI's presentation of Dambisa Moyo's debate on aid to Africa.