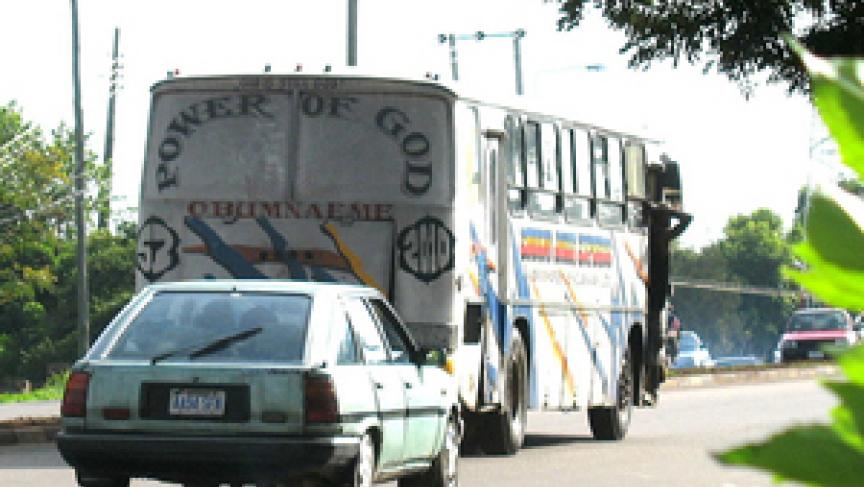 It doesn't take much to spark religious violence in the West African nation of Nigeria. Just this past weekend, rioting erupted in the town of Bauchi after Muslims parked their cars in front of a church. Bauchi lies along a line between Nigeria's mainly Muslim north and the Christian south. Tensions in the region often spill over into violence, but one man is trying to bridge the gap. He preaches a liturgy that blends Christianity and Islam.

Of hundreds of small churches in Lagos, this likely is the only one that has both a Bible and a Qur’an on the lectern. The invocations come loudly from both. Practitioners of what the preacher calls ‘Chrislam’, fifteen hundred on some Sundays, see no religious fault line.

The minister – they call him ‘prophet’ – is Shamsuddin Saka. In English, translated into the Yoruba spoken by most congregants, he says Christians and Muslims are both children of Abraham.

Saka was born Muslim, and it was after returning from a Hajj pilgrimage to Mecca that he was inspired – he says instructed by God – to launch his new ministry: "That was about 19 years ago. I was praying and I [laid] down and the Lord told me, make peace between Christian and Muslim."

Saka said he writes letters to political leaders, and visits conflict areas when religious violence breaks out, urging reconciliation around common beliefs. But his most direct impact may be in the example he’s set in his own church with its blended liturgy.

It begins each Sunday morning with Qur’anic prayer. The prayer is intense, a trance-like frenzy similar to a Pentecostal Christian service. It climaxes with a sermon hitting repeatedly on the themes of prayerfulness and on the commonality between Islam and Christianity.

Unusual as this scriptural mix is, Ishak Akintola, a religion scholar at Lagos State University, says its spiritual basis is sound: "The Bible concentrates on teachings of love; that's what Jesus says in Matthew: Chapter Five, that you love your neighbor and you even love your enemy. Now you find the Qur’an saying exactly the same thing."

Islam was brought to West Africa by Arab traders ten centuries ago, Christianity by European colonization starting in the 15th century. Each has been interpreted and adapted to local needs and customs.

Mara Leichtman is an anthropologist at Michigan State University: "According to Islam, the prophet Muhammad was the final prophet, but certainly not the only prophet; and they believe in Jesus and all of the other prophets of Judaism and Christianity that came before the prophet Muhammad. So it’s nothing foreign to a Muslim to believe in Jesus, to pray in Jesus, to light a candle for the Virgin Mary, for example, as I've experienced Muslims do in churches in Senegal."

There is something of the health-and-wealth gospel here. God or Allah bestows miracles and riches on the faithful. Saka himself drives a late model Hummer, the gift of a couple of followers grateful for an answered prayer, he says. He’s aware that the shiny SUV could raise the eyebrows of a visitor in a land of extreme have and have-not, but he insists that he does not personally benefit from people who tithe in his church: "Listen to me: we don't collect much money. This is not my own source of income."

The small change from collections didn’t make him a millionaire, he says; the real estate business did, long before he began this ministry. Even skeptics give Saka credit for forming this worship community, and for rediscovering the innate tolerance in a service that’s part Muslim, part Christian, and wholly West African.