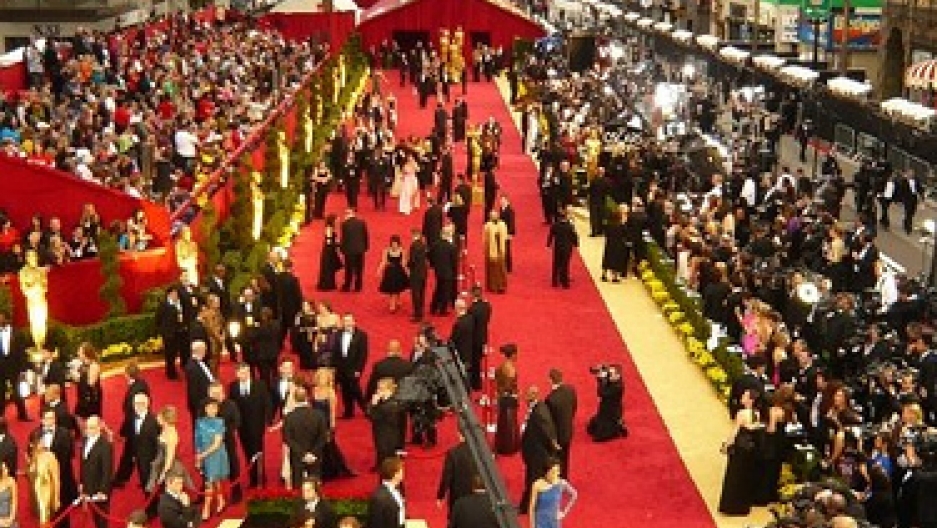 Attending the Oscar ceremony last night, I realized why the pre-show red-carpet rigmarole has become more and more a focus of the television coverage over the last decade or so: that's the juiciest part of the quasi-official event, a reality-show The Day of the Locust without the apocalyptic ending.

First there's the arrival by car through a half-mile-long cordon sanitaire enforced by scores of LAPD officers and quasi-military LAPD vehicles, crawling at a few miles per hour past roped-back hundreds of noisy citizens. (The printed Academy of Motion Picture Arts and Sciences instructions noted that limousines longer than 39 feet could not be accommodated.)

A few of the citizens were waving vicious you-Hollywood-people-are-damned signs. But most of them were just celebrity-besotted bystanders eager to be in the proximity of the spectacle, and to gawk. (Like me, in other words, but without tickets.) I also spotted an FBI agent among the police, and wondered: why? The slow-mo mob walk up the red carpet was entertaining; I felt as if I'd stepped through the looking glass -- or, rather, through the TV screen. No one asked me who I was wearing; I would've been obliged to answer, 'Armani circa 1993 for the jacket, Men's Warehouse 2009 for the pants.'

As splendidly and inventively staged as the show inside the theater was, the audience scene there, despite the strictly black-tie costuming, isn't exactly thrilling. The celebrity ratio is low. A friend, like me a first-time attendee, remarked that it felt to him like 'New Jersey prom night.' And by the way? Waltz With Bashir was robbed.

The party thrown afterward by Vanity Fair at an old hotel on Sunset Boulevard, however, was astoundingly glamorous, like a Hollywood party as portrayed in a Hollywood movie. In general I disapprove of name-dropping, but what choice do I have? In a space no larger than my house I walked and stood within a few feet of Amy Adams, Judd Apatow, Jason Bateman, Halle Berry, Danny Boyle, Larry David, Robert Downey Jr., John Hamm, Mick Jagger, Elton John, Nicole Kidman, Jude Law, Debra Messing, Rupert Murdoch, Natalie Portman, Seth Rogen, Ben Stiller, Meryl Streep, Tilda Swinton, Uma Thurman and, according to my wife, the young male stars of Twilight and The 300.

Having absolutely gorged on glitz for 10 hours, I am now exhausted, and feel as if I should retreat to a monastery for several weeks. Or at least read Henry James and take a nap.