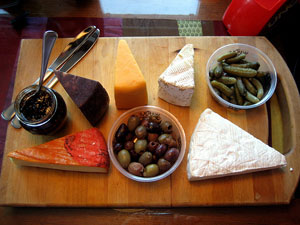 Now, from variations to cornichons.  Any foodie knows that those tiny imported French pickles are called "cornichons" and they hold a special place for the French.  But globalization is changing the way cornichons are produced and distributed, and that's changing the way the French think about their food.  "The World's" Anita Elash reports from cornichon country, in the Burgundy region of France.

The crunch of a French cornichon is a familiar sound in Florent Jeannequin's home in the village of Appoigny.  Jeannequin's family has been growing cucumbers for cornichons for more than 40 years.  The French food company Maille Amora built its pickling plant just down the road, but Maille Amora doesn't buy Jeannequin's cucumbers anymore.  A couple of years ago, the company started importing cheaper ones from India.  Now Jeannequin is one of only three cucumber farmers still in business here.

Jeannequin:  [TRANSLATION] We’ve stopped making French cornichon in France, so what we've lost is a sort of brand-name. It's as if there were no more French players on the French national soccer team.

Which is one way of saying the French take their cornichon very seriously.  They're not just a pickle here; they're a symbol of what globalization is doing to the French dinner plate.  At a Sunday morning food market in Paris stalls are laden with regional goodies: dried apricots and figs, fresh apples and pears, mounds of hams and sausages on the grill.  But now there's foreign competition. You can buy truffles from China, snails from Turkey, and cherries from Chili.

Jerome Grandinot is at the market to buy some locally-made cheese.  He is shocked to hear the French cornichon is no longer French. : "You’re sure of that?  The thing I think is you don't know anymore where the foods are coming from, our food.  I always prefer knowing where the food comes from because it's very often the proof of quality."

Fellow shopper Arnot Xaint agrees:  "We have every possible food at every season, that means that we receive food from anywhere in the world, but the quality of the product is absolutely not the same."

Some observers say complaints about quality mask a deeper concern. Claude Fischler is a Paris-based food sociologist.  He says many in France view a globalized food supply as an assault on their identity.  He says it comes down to the proverb, "You are what you eat."

Fischler:  "And if you are what you eat and you don't know what you eat, of course there's a problem with who or what you're going to be.  It's an issue, there's an issue with your identity.  I mean this is something you can actually hear, listening to people."

Back in Appoigny, Florent Jeannequin is determined to keep his family farm going.  He's now growing larger cucumbers and sending them to Germany, where they're pickled for the Austrian and Polish markets.  But it doesn't entirely pay the bills, so in order to make a living Jeannequin's renting out storage space to Maille Amora, the company that used to buy his cucumbers.  His warehouse is now filled with barrels that say, "Cornichon imported from India."