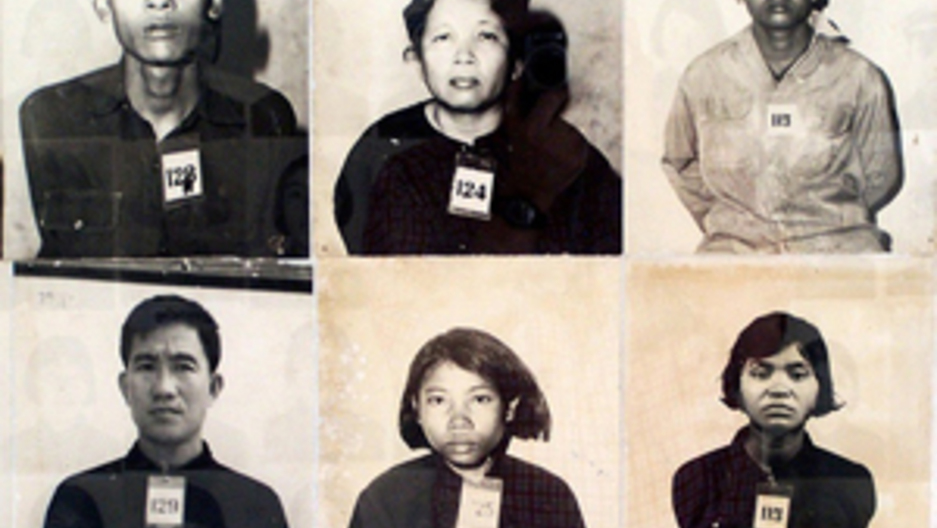 In the late 1970s, the Khmer Rouge presided over a four-year reign of terror in Cambodia. The regime launched an agrarian crusade that killed, starved, or worked to death some 1.7 million people. Some of the targets of the Khmer Rouge were turned over to torture centers; the most notorious center was Tuol Sleng. It's in Phnom Penh.

The word on what happened at Tuol Sleng is already going out in the form of a short documentary film. The film is called "The Conscience of Nhem En." The title character is Nhem En; he was the staff photographer at the torture center. His job was to take photos of the prisoners shortly before they were to be killed.

The film's been nominated for an Academy Award for best documentary-short. Director Steven Okazaki admits that he wasn't sure he understood the man who would become the subject of his film.

Steven Okazaki: I essentially found his situation really hard to fathom I guess, from just myself personally, that he would stand by--I think he says he took about 6,000 photos. And so he'd know pretty much absolutely everyone that he photographed was innocent and about to die.

Lisa Mullins, host: These are people, if you look at the photographs they were black and white photographs and they're essentially mug shots of people looking straight at the camera.

Mullins: So you shoot them?

Okazaki: Yeah, and so they're much higher quality than you would normally have for ID photos. And so I think that's what's really sort of compelling about them is they're--many of them are just quite beautiful photographs. And I guess what's also startling is some of the people seem to be smiling because someone says--you know, is about to take their picture. But most of the people have the look of, you know, what it looks like when you know you're about to die.

Mullins: When you spoke to the photographer on film, his telephone rang, his cell phone rang about four times and a couple of times he said it was Cambodian authorities. I mean, clearly there's an eye on him. I imagine there is an eye on you as well. Why is that? I mean, what's the current situation like that people would still have someone from above watching them?

Okazaki: Well, I think that there are still people that were active in the genocide that are--they're still around and people are still afraid of them. I'm not sure exactly what was happening, but we had--while we were doing the filming there was a man nearby that we assumed was a janitor 'cause he was using a broom. And we saw him later coming out of a government building, and Nhem En, when we were doing his interview he got four cell phone calls and three of them were from a government official. He would not tell us who he was, but it was clear that by the way he was addressing them--and he actually said right in front of us on the phone, "No, I haven't said anything damaging."

Mullins: Why did he talk to you at all?

Okazaki: Nhem En is a really complicated person I think, that it seemed to me that he wants to make some money, he says to help educate people about what happened. In the film he does, and I think that it's true; he says if it weren't for these photographs who would even care?

Mullins: Let me just ask you something else. You ended this piece with something I didn't expect; it was the Goldberg Variations by Bach. How come you chose this?

Okazaki: When we were shooting the film, sort of when we were not doing the serious interviews I decided to do portraits of people on the street as a way of sort of responding to, you know, the miserable, cruel photos you see that were taken 30 years ago and have some sort of positive response, and so we did.

Mullins: And there is, I mean people look at you and smile as you're taking their photographs.

Okazaki: Yeah, and you have a sense of, you know, the other lives of people and, you know, the small joys. And so, I don't know why but the Goldberg Variations just sort of came into my head as soon as I brought the footage home. And then I thought, "Well, I'll drop this as soon as we figure out some other music." And I loved it more and more every time I played it and I asked my friend, a great classical pianist, Maury Codama to record it for the film.