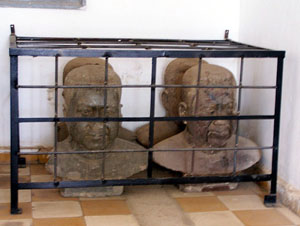 Busts of Pol Pot on display at the Tuol Sleng Museum of Genocide are protected by a cage to discourage vandalism. (Image: tkelly7029, Creative Commons)

In the 1970s, the Khmer Rouge turned much of Cambodia into killing fields. Now, 30 years later, an internationally backed tribunal is about to put five officials of Pol Pot’s regime on trial. The first trial starts tomorrow. The tribunal is a mix of international and Cambodian judges and lawyers. Many Cambodians are eager to see the Khmer Rouge brought to justice. But some say this tribunal is too little, too late, and too compromised. "The World's" Mary Kay Magistad filed this report from Cambodia; she begins in the village of Trapaing Sva.

An angular woman named Chhum At sweeps leaves and red ants from a shaded platform for visitors to sit on outside a Buddhist shrine to the dead. Inside, a pile of femurs and skulls – ten-feet wide, five-feet high, and just as deep. These were victims of the Khmer Rouge. They include two of Chhum At’s brothers, two uncles, an aunt and a cousin. Chhum At says the Khmer Rouge beat her almost to death when she was about eight.

Some of the former Khmer Rouge who lorded it over her still live in her village, and she hates them. Chhum, through a translator: "I feel that I hate them so much, but I don't know what to do. Because after 1979, we had the law that we are not supposed to feel angry or feel any revenge to those people. But I feel – hate them so much."

Chhum At says she'd like to see the Khmer Rouge here in Trapaing Sva brought to justice. She's not paying much attention to the tribunal in Phenom Penh. She's not as personally invested in that trial but at least she knows who the former Khmer Rouge leaders are. Not so, her neighbor. He’s a young former government soldier and he spoke through a translator: "I don't know Pol Pot. I don’t know the name."

So much for the outreach efforts that were supposed to help Cambodians feel engaged in the tribunal process. Maybe that's because the tribunal has allocated just $50,000 of its more than $100 million-dollar budget to public awareness campaigns. And though the first hour of the trial will be broadcast live, after that, not even journalists at the court will be able to record the proceedings. Instead, the Cambodian court officials say they will make DVDs and broadcast them later at night. That could give the Cambodians time to edit some portions out.

Human Rights Watch senior researcher Sara Colm says there are other ways in which this largely UN-funded tribunal falls short of international standards of justice: "The Cambodian judiciary is widely known for widespread corruption and being subject to political directives from the government."

Already there are what Colm calls "credible reports" of Cambodians within the tribunal having to give kickbacks to Cambodian government officials. The government denies those reports. And the

The Cambodian co-prosecutor, who is the deputy Prime Minister's niece, is resisting bringing to trial any more than the current five former Khmer Rouge leaders already charged. She cites the need for national reconciliation. Critics point out that many top leaders in the current government are former Khmer Rouge and don't want the court to dig too deeply into the past.

Heather Ryan is an independent observer of the tribunal for the Open Society Justice Initiative. She wants the court to be more aggressive: "The prosecution of more than five persons is important to the credibility of this court, both to show a broad picture to the people of Cambodia and the world of what happened during the Khmer Rouge period, and to demonstrate the integrity of the court and its freedom from political interference."

This week's session is the beginning of a tribunal that took 12 years to arrange. That's three times longer than the Khmer Rouge took to kill 1.7 million people. No wonder public interest in the tribunal has waned.

Even Phnom Penh professional Boreth Sun, whose brother was killed by the Khmer Rouge, feels let down: "The process has taken so long, and it’s closed door so we don’t know what really happened. And so, I think you have to have it. I’m supporting it, but I’m supporting it if it’s more independent and less politicized."

The challenge of the court is to win the trust of people like Boreth Sun, and the attention of villagers like those in Trapaing Sva. Otherwise, the tribunal risks falling short of delivering what it promised – justice, national catharsis, and an accurate narrative of a horrific past.