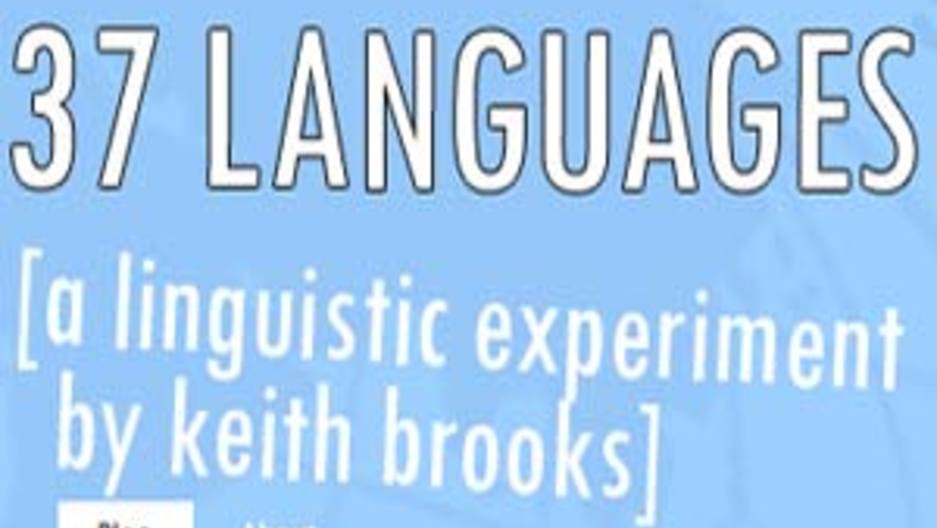 "The World's" Patrick Cox talks to Keith Brooks -- he's 24, he works in web design, lives in Louisville, Kentucky, and he's looking for the perfect foreign language to commit to.

As a kid, Brooks was an unusually quick learner -- he was also just plain unusual. At the age of nine he would devour language text books from the library: "Like for example if I got a Russian book, I would just go through cyrillic and memorize the alphabet, and then hey I'd be done ... and then I'd go to Arabic, and then French ... it was a really interesting childhood I had."

Spanish was Brook's first love, but he's just not that into it now: "I really loved speaking it, it was probably the first thing I really devoted my time studying; but I just feel like there's not a draw there anymore."

At college Brooks studied linguistics, but try as he might -- with French, German, Russian, what have you -- he couldn't settle on a language.

Now though, he has a new plan:  He's trying out a new language every week -- studying its history, its culture, its writing system, its grammar, and of course the richness of its vocabulary. Then he writes it up in his blog called 37 languages. Since December, he's done this with 13 languages. And this is just part one of his process -- the "speed-dating" part. After he "speed-dates" 37 languages, he'll drop all but ten of them.

The ten will get a real "date" with Brooks: "Those ten languages, they'll get a call-back, and I will do a more extensive review of those languages. I'll use the writing system, I'll speak in the tongue of those languages -- and that will probably be at least a week per language."

Brooks illustrates his blog with embedded videos -- of songs sung in each of the languages he's checking out.

He hopes to spend quality time with all ten of his finalists this Spring, then will come what he calls the hardest part -- leaving nine of those languages behind and committing to a single tongue: "I am ... worried that I may make the wrong choice and pick the wrong language, but if it happens then I'll just go to another language that I probably like just as much as the one that I selected."

There are after all, plenty of fish in the linguistic sea. An early favorite for Brooks is Norwegian: "I love the way it sounds, I love the vocabulary, I love little features like the retroflex that's kind of trilled."