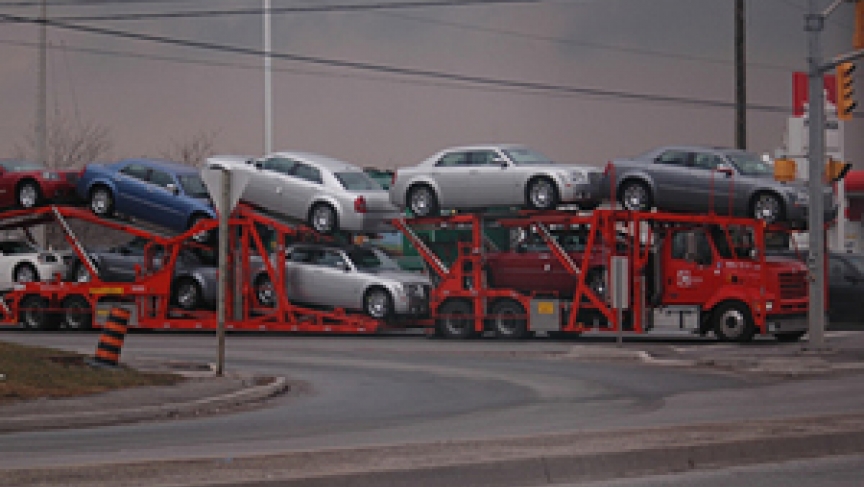 The U.S. auto industry used to be attractive to workers.  American car companies offered good salaries, stability, health benefits, and a way to send the next generation to college.  Well, that formula attracted many Latino immigrants to go to work for one of the Big Three, but now with the Big Three in serious trouble Latino auto workers are feeling especially vulnerable.

2009 has barely begun, but Cindy Garcia is already worried.  She's an assembly worker with nine years under her belt at Ford Motor Company, but as her family prepares a meal on a freezing afternoon at her home in Dearborn, Garcia says she's scared about the future.

Garcia says she's bracing herself for the worst and thinks it's only the beginning of a financial struggle that may last years.

Garcia is a second generation Latino auto worker.  She started working at Ford because she saw it as a way to give her children a better life; just exactly what her father did for her and her brother a generation ago.

"So yeah, he came here and got the American dream like the rest of the immigrants who came back in the day when they were trying to form the Union.  So they did as much as they could, but now the whole dream is falling apart with Ford Motor Company, GM and Chrysler."

Garcia's father, Jose Ramos, immigrated to the United States from Mexico in the 1970s.  Drawn by solid wages and excellent healthcare benefits Ramos worked in the auto industry for 30 years, made his way into the middle class, and was able to send his children to college.  But according to auto consultant Lizabeth Ardisana, the trouble facing the beleaguered Big Three will have an especially deep impact on Latino auto workers and Latino-owned businesses.

"If you look at our community, and I'm talking about the Hispanic community specifically, is that we're the newest suppliers, we're the newest workers, and we're the ones who are most stressed right now.  We will be the first to be impacted by this," says Lizabeth Ardisana, CEO of ASG Renaissance, an automotive consulting company in Dearborn.  She started her business 21 years ago and says it's paramount that the Big Three survive and continue to funnel money into Hispanic-owned companies.

"A few years ago when I added up the dollars that the Big Three spent with Hispanic businesses, it was almost a billion dollars.  If they're not doing that, that's a billion dollars into our community that will be gone.  And that's just through the supply base."

Latinos have worked in the auto industry since the 1920s, but it wasn't until the late 1970s that the relationship between the Hispanic community and the automotive industry flourished beyond day labor.  Even today, Latino workers tend to work lower levels of the supply chain.  Yet in Michigan alone there are roughly 25 Hispanic-owned companies related to the auto industry, 15 of them are listed among the top 500 Hispanic businesses in the nation.

"You know, if you look at the biggest Hispanic businesses in the United States they relate to the auto industry; they're auto dealers or auto suppliers.  I mean, that impact will set us back generations," says Ardisana.

"I think the other reason that we as a community, the Hispanic community, will be more dramatically impacted is we're a younger community.  So we haven't established the roots that let us sort of ride out a drought like this."

On a bitter cold winter day, Gregorio Martinez sits next to a heater in his modest home in a rundown neighborhood of Detroit.  Martinez is a retired auto worker and worries about what will happen to his healthcare benefits and pension.  He's in his late 60s and has a back injury.  Martinez says he's afraid, tense and depressed.  He says he probably gave his life to Ford and chokes up when he talks about his 23 years there.  He remembers how he didn't speak English when he started and how his bosses would bring him a cake on his birthday.  When Martinez first arrived in the U.S. in the 1970s he worked at a slaughterhouse, then later on the railroad.  He says his life changed when he started working at Ford.  "It was an incredible time," he says.  "I had full healthcare benefits and was able to bring my family from Mexico, everything worked out."  Ten members of Martinez's family including sons and daughters eventually worked at Ford, many still do.  But Martinez worries they won't have those jobs for long, and he hopes the Big Three will use the lifeline they've been given by Congress to save the auto industry.