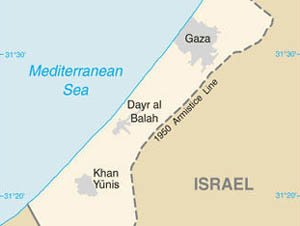 Israel launched a ground offensive in Gaza this weekend and started house-by-house fighting. Meanwhile diplomatic efforts by the global community have stepped up and French President Nicolas Sarkozy is set to meet with Israeli and Palestinian leaders today.

Ethan Bronner is the Jerusalem bureau chief for the "New York Times," and he joins "The Takeaway" to talk about the current situation in Gaza.

Bronner says of the ground offensive: "What Israel wants to send as a message is to say: 'we will go to all lengths to stop the rocket fire and to break the military infrastructure of Hamas' ... the issue is whether there will be actual combat for days on end, or whether the goal is to send this message, and then work out a diplomatic cease-fire in the coming days ...

"The issue is for Israelis: A sense that their enemies had taken the view in recent years that they have lost the appetite for this kind of combat ... and in particular because of what happened in 2006 in southern Lebanon, viewed essentially as an Israeli defeat ... the worry in a way has doubled, which is that organizations like Hamas will take the view that Israel doesn't have the stomach for such a battle."