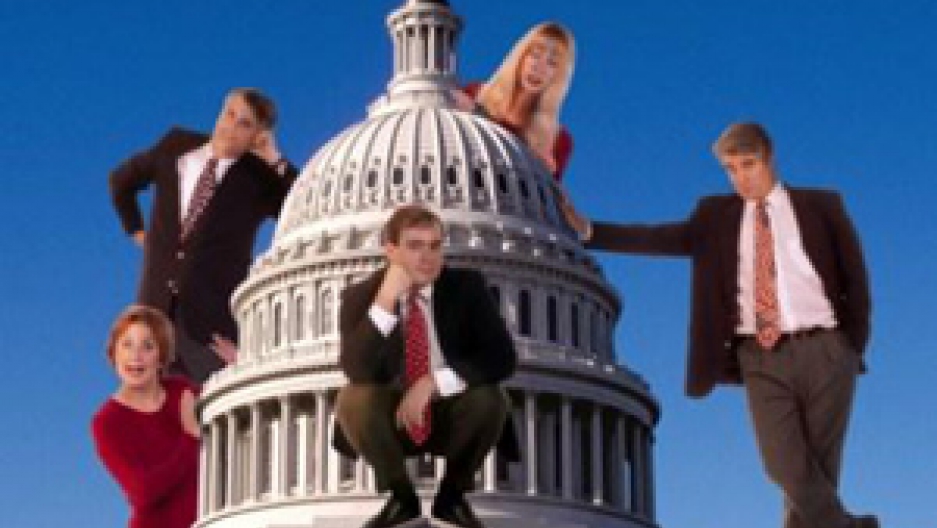 The group that put the 'mock' in "Democracy," The Capitol Steps, puts the year's big stories -- the election and the economy -- to music. "Capitol News Connection's" Elizabeth Wynne Johnson interviews Elaina Newport, the producer and co-founder of the Capitol Steps.

Newport: "It is true that what's good for the country isn't necessarily good for the Capitol Steps or for comedy. Sometimes we root for the wrong person to win ..."

An example was a certain, very charismatic, erstwhile candidate from Hope, Arkansas who isn't Bill Clinton.

Newport: "We had a song about Huckabee. And we though, 'Aww – there goes Huckabee' when he dropped out of the race. And then he came back on Fox News as a conservative commentator. And we love him. He's a great character... affable ... and his name rhymes with a lot of things.

Newport: "We kind of joke about- maybe our own prejudices about it ... We're still getting a feel for that."

Newport: "The 401K song is exactly a song where we thought, ‘Can we do this?’ Can we go out and make fun of the fact that everyone’s 401Ks are dropping like stones?"

Newport: "The politicians that are involved in these issues are always fair game ... So there's often an angle to get into a serious subject, even if the subject itself is not at all funny."

Newport: "I remember being very depressed when Bill Clinton left office and thinking, 'How will George Bush possibly be anywhere near as funny as Bill Clinton?’ But he’s come through for us."

As for someone who might be perfecting a Barack Obama right now, Newport says: "We're working on it. We're looking at his clips on Youtube ... we know he does a lot of hand gestures ... clipped speech pattern. Probably it'll take a Dana Carvey or somebody -- who got George Bush senior and exaggerated him wildly in ways nobody had thought of before. It'll take a while to get a handle on Barack, I think."