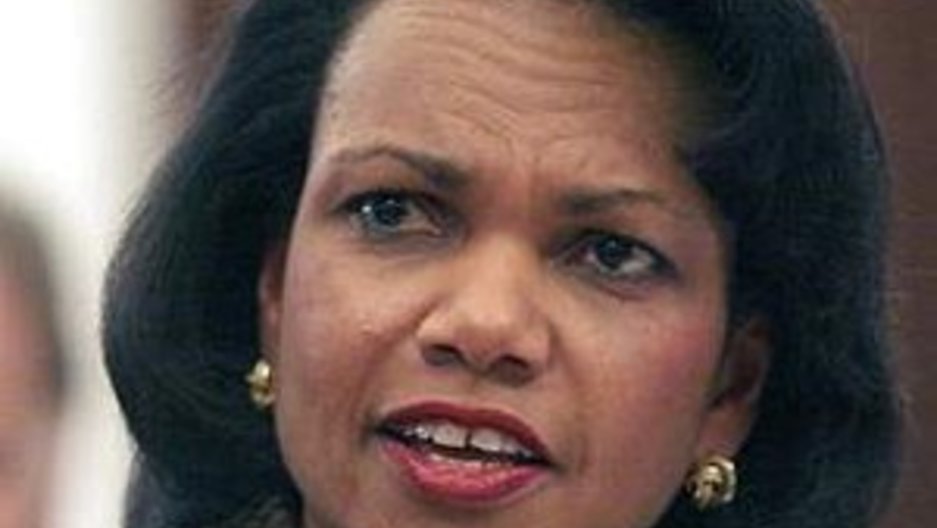 Named National Security Advisor in December of 2000, Condoleezza Rice became the first black woman to assume to role of Secretary of State in January of 2005. During her White House tenure she played the critical role of guiding America's hard-line foreign policy through the September 11 attacks, subsequent war in Afghanistan and invasion of Iraq, the Russian invasion of Georgia, and the recent tensions between India and Pakistan.

Of America's foreign policy efforts and President Bush's recent trip to Iraq, Secretary rice said: "There's always going to be some criticism of American policy, because we have to do difficult things ... and I know that it doesn't matter who's in office, we'll have to do difficult things, and sometimes people won't like them. But what the President stood for, and what was important about that trip to Iraq was he got to stand next to a freely-elected prime minister of Iraq, in front of journalists who could speak their minds and even vent their anger, and that's a far cry from when Saddam Hussein was in power; so if America stands for its values, it might not always be popular, but it will be respected."

When asked about how the election of Barack Obama has been received by the world, Secretary Rice said: "Well I think Americans need to know that around the world what people see is that we're overcoming old wounds, and that's important in a world where "different" is still a license to kill in so much of the world. And to see an African American president, someone who came in fact from modest means, means America really is what it says it is. And that's really been important.

"It was a fascinating election around most of the world. You go places and people were talking about the Iowa caucuses in some parts of the world, and so this exercise in American democracy and this outcome has been very good for Americans, so it's good for the world."

While regretting that the U.S. had flawed intelligence around Iraq, Secretary Rice says she stands behind the invasion of Iraq: "While I certainly regret the flawed intelligence, I don't regret ... deliberating Iraq from Saddam Hussein. I think that, with weapons of mass destruction or not, he was an aggressive ... figure in the region, who had invaded his neighbors, had used weapons of mass destruction, was an implacable enemy of the United States ... I'd be the first to say Iraq was so much harder than I ever dreamed it would be, and nobody could ever bring back the people who were lost there, but I do believe that the Iraq that has emerged is an Iraq that will make the Middle East ultimately safer and freer, and more prosperous, and for America that will be good."