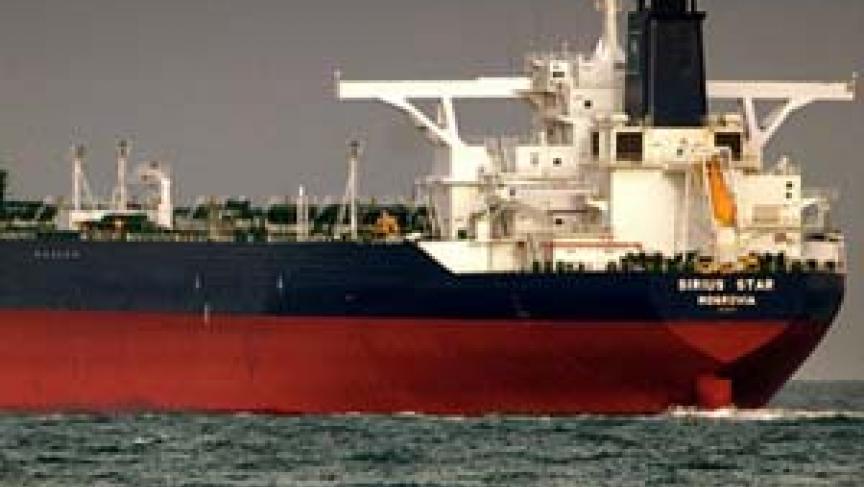 An oil tanker similar to the one seized by Somali pirates.

The tanker is in Somalia, and the ship's owners are working toward the safe return of the 25-person crew.

Africa expert Robert Rogberg of Harvard's Kennedy School of Government says pirates have never been so bold: "This was the largest pirate attack to my knowledge in modern history. No one has ever dreamed that they would ever take a tanker, so it has escalated entirely the worries that ship owners and navies would have."

Here's how its believe the Somali pirates did it: they approached the tanker in speed boats and threw hooks tied to rope ladders. The pirates boarded and the tanker, as big as an aircraft carrier, was their.

It's remarkable that such a large prize in a key shipping zone could have been captured so easily. It's especially remarkable when you consider that the U.S., British, Russian and NATO ships have recently increased patrols in the region.

But Naval Commander Jane Campbell says those ships are responsible for more than 1.1 million square miles: "And that's comparable to the entire Mediterranean and Red Seas combined, so just a vast space. And we've told the shipping companies at the outset that even with our naval presence in the region, we will not be able to be everywhere. And for that reason we have strongly encouraged pro-active self-protection measures for the shipping company."

That might mean armed security guards on ships to prevent the pirates from boarding in the first place.

NATO spokesman James Apathy says piracy off the coast of East Africa is a problem for the whole world: "I think we should all be concerned. Attacks are up 70 percent this year, and that is substantial. A number of shipping companies are looking at re-routing, from going through the Gulf and going down around the Cape of Good Hope. That would add 12-15 days, and about $20-30 thousand dollars a day to the cost of doing business. And that cost will be passed on to me and to you."

Somali pirates are expected to earn some $50 million dollars in ransoms this year. They are currently holding some 14 ships off the Somali Coast, including the Saudi oil tanker.

Jason Margolis filed this story for PRI's "The World."

More stories on Somali pirates from "The World":

Interview with William Langewiesche, International Correspondent for" Vanity Fair," about the rise in pirate activity off the coast of Somalia.