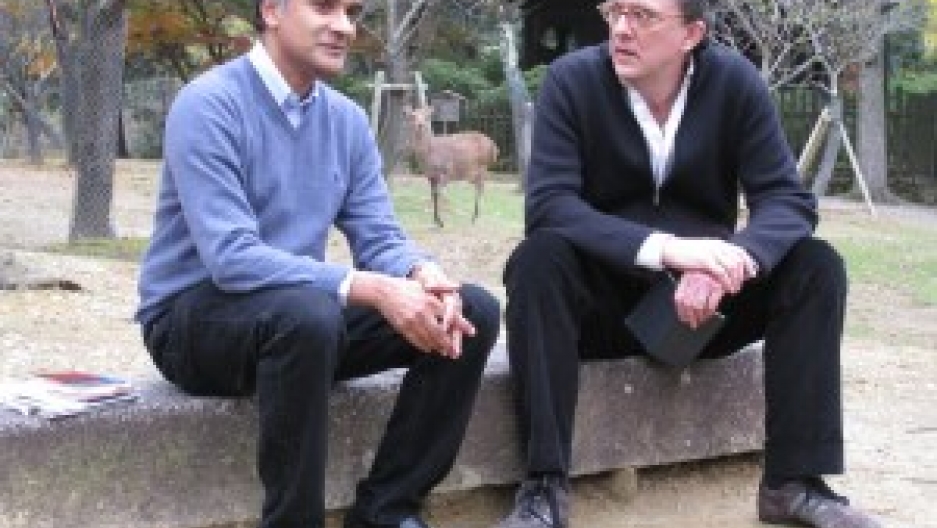 Yesterday the whole team was in Nara (30 minutes by train from Kyoto) to meet with the writer Pico Iyer -- we've turned to him several times on the show for his keen, beautifully expressed observations of life in various corners of the world. Pico first came to Japan 20 years ago -- and although he has long lived near Nara with his Japanese wife, he explained why he is and will always be a foreigner there. Yet his insights about language, politeness, rebellion, and deference (and a ton of other Japanese things) revealed so much to us about the art we've seen (as well as our own experiences) thus far in the trip.

We taped Kurt's conversation with Pico in Nara-koen -- a giant park that covers the east side of the city. It's home to several famous temples and shrines -- and 1200 deer that roam free throughout the park. (Suddenly I was five years old again and had the urge to scream 'Bambi!' But I didn't.) In days of old, the deer were considered to be messengers of the gods -- today they're official national treasures. And noisy ones: they kept making this eerie whining sound to each other -- some a high-pitched screech, others a low moan (mating calls?). After the interview, Pejk wandered around the park to get more of those sounds. The deer weren't as friendly as the ones drawn by Disney.