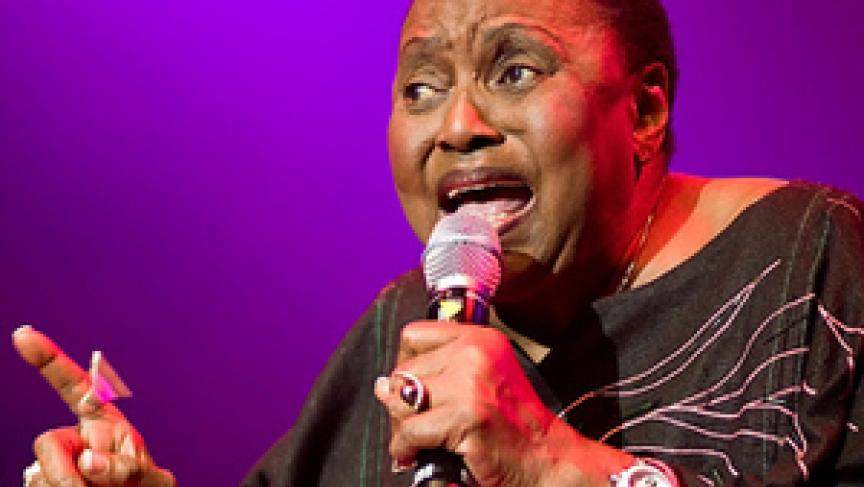 You may have heard that the legendary South African singer Miriam Makeba died yesterday.

There's something else she was known for:  a speech she gave before the United Nations General Assembly in 1963. Makeba was in her early thirties. She sounds much younger though, as she pleaded with world leaders to pressure the South African government to do away with apartheid.

“I ask you and all the leaders of the world, would you act differently, would you keep silent and do nothing if you were in our place? Would you not resist if you were allowed no rights in your own country because the color of your skin is different from that of the rulers, and if you were punished for even asking for equality. I appeal to you, and to all the countries of the world to do everything you can to stop the coming tragedy. I appeal to you to save the lives of our leaders, to empty the prisons of all those who should never have been there.”

After she spoke to the UN, Miriam Makeba's life changed. The South African government revoked her citizenship. She made a new home in the United States.

Makeba already had a close friend here in 1963. Harry Belafonte. We spoke with him earlier today.

“Well I worked with her for several days on that speech. And most of it was her own voice, and much of it her own thoughts. And she was quite anxious about appearing before this august body of the leaders of the world.”

Harry Belafonte and Miriam Makeba grew even closer after she moved here. At the time though, says Belafonte, the US was going through its own chapter of racial turmoil. And he knew there were limits to how outspoken Makeba could be.

“Our State Department would not have wasted any time in finding her a political undesirable, and shipping her back immediately to South Africa. LM: Did you tell her how to tread carefully; did you give her guidance along those lines? HB: Yes I did. LM: What did you say? HB: I said, "Ill handle the politics, you handle the music." LM: And how did you handle the politics? HB: I spoke on her behalf, on behalf of the South African people, and I didn't incriminate her in any way.”

Even after Miriam Makeba had some hits in the US and built an audience here, she still thought of herself in simple terms. Here's Miriam Makeba speaking with our show 8 years ago.

“Honestly, I'm just a little old lady, a little old singer, I'm not a politician, I'm not an economist, or anything of the sort. I just wish that people can be soldiers. We can all be soldiers, soldiers not to fight against each other but to fight against poverty, illnesses, disease, and greed, and all the ills of the world, you know just be an army for all goodness.”

Miriam Makeba always said she was happiest when she was singing. And that's what she was doing when she collapsed yesterday on stage in Italy.