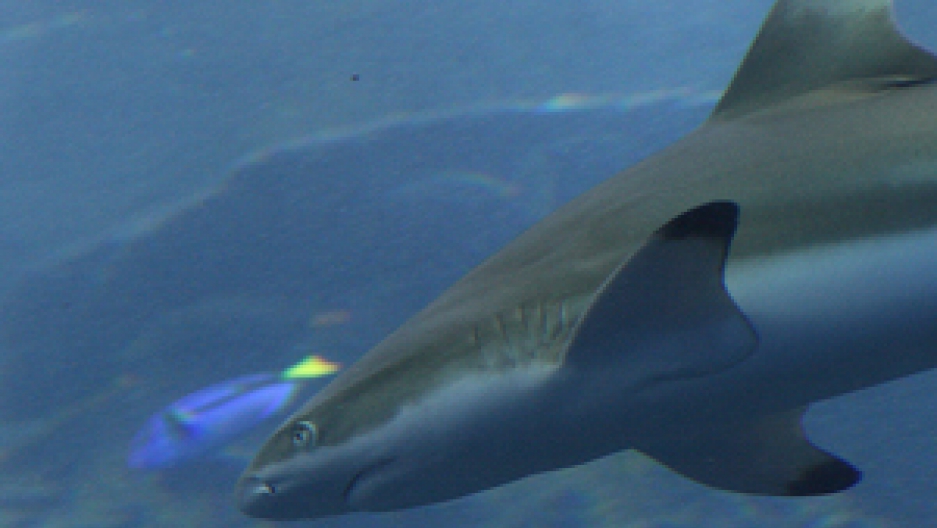 The KwaZulu-Natal Coastline—stretching from the east coast of South Africa to Mozambique, is the scene of an annual migration spectacle. Billions of sardines, driven towards the coast by warm ocean currents swarm in the sea, as sharks, seabirds, and dolphins wait.

"Wild Ocean" was co-directed by Steve McNicholas. You might know the English dancer-choreographer for his percussion theater troupe, Stomp. McNicholas traveled to South Africa to film another kind of choreography—and epic epic struggle for survival.

STEVE MCNICHOLAS: I was stunned. It was 2005, July, 2005, which is winter down there. And I was in a helicopter. We were scouting along the coast, so just taking photographs of the coast. And then I just saw this huge—it looked like—it honestly looked like an oil slick. I really thought there'd been some kind of spillage, because I'd actually just passed—there was a wreck of a tanker along the coast. But it was fish. It was this huge shoal of sardines that was really just a fraction of the shoal that was traveling along that coastline that was just swept into a little beach area. And they were literally coming up on to the sand on the beach. We landed the helicopter and went down and looked, and just this whole frenzy of people taking the sardines out of the water. The women going in with skirts and scooping sardines out in their skirts, people running in with buckets, taking fish out with buckets. And while all this is happening, you had—there was probably about twenty sharks moving in from the deeper water. So these sardines were truly doomed because on one hand you got the people on the beach who are going for them, you've got sharks in the water going for them and you've got gannets were coming in from above.

BRUCE GELLERMAN: I gotta tell you, those gannets, those birds, they look like they're dive bombing, they're kind of dropping out the sky, going boom—head-first right into the water.

MCNICHOLAS: Oh, they're incredible. I mean they plummet from 30, 40 foot in the air straight down into the ocean. And as you watch them, it's almost like they dislocate their wings or they become a living dart so when they hit the water—their skulls are specially strengthened to be able to take that impact, so when they hit the water, they go as deep as they possibly can with the—you know, the force of gravity takes them.

GELLERMAN: At one point in your film the narrator asks, you know, what can we do to keep the oceans alive. You never answer that question in the film. Did you not want to be preachy?

MCNICHOLAS: I see what you mean. No, didn't want to be preachy. You know that's just not the way I'd like to go about it. I don't preach in my personal life. You know, I really think that if people walk away and ask questions, I think that's a bit better than hitting them over the head with a, you know, list of things that they must go and do. But, you know, there are so many things we can do, and there are so many things we can be positive about when it come to the ocean. For me, the point of the movie was: Look – over a hundred years ago, this kind of thing used to happen on a much bigger scale all over the world. Now think about that. If people walk out thinking 'Wow, that's an incredible experience and I can't believe it used to happen just off the coast where I live.' If they can come way with that message, then that's, that's a start.