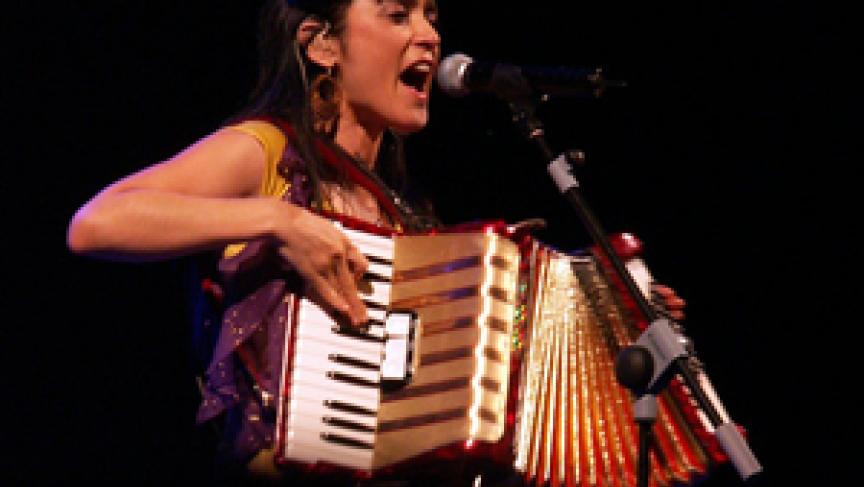 Julieta Venegas might want to clear off some space in her trophy room.  The Mexican singer-songwriter has been nominated  in four categories in this year's Latin Grammy awards.  She, and the rest of us, will learn next month whom the Latin Recording Academy has chosen for the honors.  But Venegas is already People's Choice.

Venegas was born in California, but she grew up across the border in Tijuana, and that is where she began her musical career.  She has since moved to Mexico City and established herself in the top tier of Mexico's musicians.  But, you can still hear a bit of Northern Mexico in her music, especially when she plays the accordian.

Her latest album, "Unplugged," was recorded in Mexico City.  Some people hear "unplugged" and think, "right; the old hits, with the singer on acoustic guitar."  Venegas says she thought it meant more than that.

"When I thought 'unplugged,' I thought wow; all of the instruments I have been curious to use but I haven't been able to."

Among the new instruments Venegas wanted to play with were the violin, the banjo, and the tuba.

Now Venegas is taking her 15-piece, unplugged concept band on the road for a global tour, from Argentina to Chile, to Spain and Switzerland, with a few stops in Mexico and the United States.

Venegas says that she enjoys coming to play for audiences here in the United States.

"Most of my public is actually Latino, so it's actually kind of giving them something Mexico, you know?  I know there is a lot of nostalgia when they live (in the U.S.) and they are very far from their original place.  So, I like to be someone who represents where they are from and what they are about.  I really enjoy that," she says.