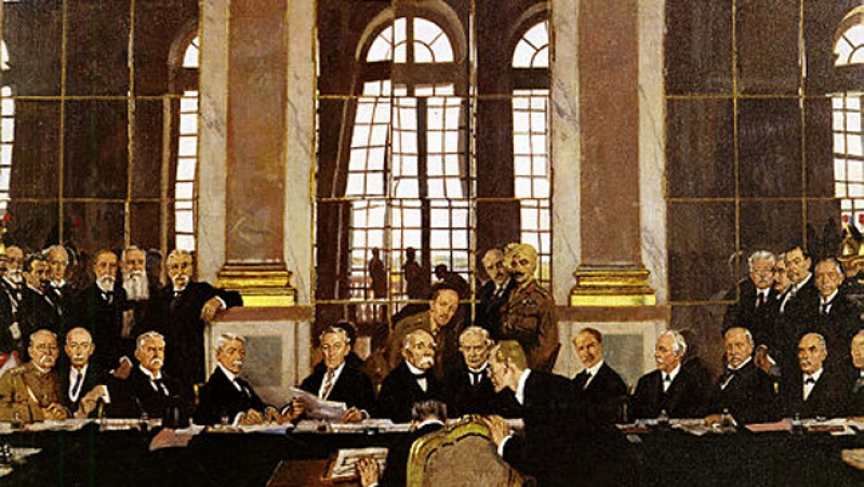 The Signing of Peace in the Hall of Mirrors, Versailles, 28th June 1919 painted by William Orpen.

World War I was a massive conflict. Ten million soldiers died and whole empires disintegrated. At the end, the winners carved up the spoils. There are lessons in that ending - but not necessarily the ones we've been taught.

The Hall of Mirrors at the Palace of Versailles outside Paris is a gleaming, glittering place where the light ricochets off the mirrors and chandeliers. It was here, on June 28, 1919, that world leaders sat down with German officials to sign the Treaty of Versailles.

Historian Margaret MacMillan describes the scene in her book "Paris 1919."

"It was a very formal ceremony, but at the end it was chaos. The world leaders, Lloyd George, the British prime minister, Clemenceau the French prime minister, Woodrow Wilson the American president, went out to that gorgeous terrace, leading out to that great park, and the fountains went off, and there were a huge number of people standing outside and the crowd jostled everyone and Woodrow Wilson lost his top hat and Lloyd George was furious, so it was a mixture of ceremony and chaos."

A mixture, MacMillan says, that perhaps summed up the state of Europe at that moment. World War I had upended the old order.

"It's an end and it's a beginning," says Hew Strachan, professor of the history of war at Oxford University. "For western Europe it’s an end to the idea that war is an acceptable way of solving your political differences. The First World War and the Western Front becomes the definition of the awfulness of war. In the east on the other hand it is a beginning, because new states emerge."

That sense of upheaval gave the Paris peace conference a heady feel. It was modelled on the Congress of Vienna, which marked the end of the Napoleonic wars a century before. But the issues in Paris were far more complex.

"You had all the hotels being besieged by Arabs, by Jews, by Greeks, by Bulgarians, by Macedonians, I mean they really couldn't plan for this kind of peace," Steiner says.

So the peacemakers sometimes made hasty and arbitrary decisions. Over time the conference has become known for the hubris with which statesmen carved up empires and created new countries.

Former US diplomat Peter Galbraith has witnessed the consequences of those decisions in the Balkans and the Middle East.

"If you're going to engage in that kind of war-ending scenario, you really need to know what you're doing," Galbraith says.

His favorite horror story from that time concerns the British diplomat Harold Nicholson.

"Nicholson was sitting with the British, French and Italian heads of state one day and they were drawing the line on a map of Anatolia between Turks and Greeks. As they were drawing the boundary, Nicholson looked at the map and realized that they have confused a topographic map for an ethnographic map and thought that the brown (areas) are the Turks and the green (areas) are the Greeks, when in fact the brown is the mountains and the green are the valleys," he says.

Nicholson spoke up and averted that particular disaster, but it wasn't enough to avert war between Turkey and Greece in the years to come. In fact wars have erupted in many of the places the peacemakers thought they were sorting out once and for all.

"I don't think we will ever again get so many powerful people sitting in one place for so long. You know, Woodrow Wilson the American president, with one brief month when he dashed back to the United States, was out of the United States for six months! He left beginning of December 1918 and didn't come back home until the middle of July 1919. Can you imagine today an American president doing that?" MacMillan says.

Wilson's idealistic foreign policy was a central feature of the conference. His ideas about self-determination and his proposal for a League of Nations promised a new way forward.

But his words also complicated things, sending out mixed messages. The confusion over Wilson's position began in the last year of the war.

In the spring of 1918 the Germans launched a last-ditch offensive on the Western Front. They gained territory, but by the summer, the Allies counterattacked and broke through the German lines. The German Army was forced to retreat. It was in bad shape, running out of men and running out of supplies. To make matters worse, its allies were dropping out of the war. At the same time, fresh American troops were pouring in. In late September the Germans began asking for peace. But instead of speaking to the British and the French, they approached the Americans, thinking they would take a softer line.

"I think there was misunderstanding on both sides, the Germans were led to believe that they were being offered peace terms on a Wilsonian basis, on a number of statements he'd made about a peace without retributions, a peace without revenge, a peace that would treat everyone fairly," MacMillan says.

But it wasn't realistic. And it contributed to a feeling that Germany had been promised a peace in which it wasn't going to lose much.

That didn't turn out to be true.

In October 1918, while the armies were still fighting, a series of letters passed back and forth between Wilson and the Germans. The Germans were negotiating for an armistice - a truce in effect - that would lead to peace talks. But Wilson and his allies wanted Germany disarmed - and they used the armistice to impose a defeat.

"What actually happened in the end is the Germans sent an emissary, in a very old-fashioned way, bearing a white flag, and a car went through the lines and it came to Marshal Foch in the Allied headquarters in Campiegne, and in his railway carriage the armistice was signed. If you look at the terms of that armistice it's really a defeat. The Germans basically gave up all their heavy equipment, they gave up all their tanks their field artillery, their machine guns, they'd already lost their fleet," MacMillan says.

The armistice went into effect on November 11, 1918. What soldiers remembered was the silence as artillery finally stopped firing.

The war was over, at least for the moment. But if it was a defeat for the Germans, it was an ambiguous defeat. The final peace treaty was still months away. And this wasn't the sort of ending the men who led the fighting were expecting.

Steiner says the German question loomed over everything else at the Paris talks.

But MacMillan says the peacemakers disagreed on how to treat Germany. They agreed Germany should be made to pay reparations, but squabbled over the size and share. They agreed Germany's borders needed to shrink, but disagreed on where and why. They had to decide how to control its army, and whether to try the Kaiser for war crimes. It took months. It took so long in fact that once the great powers had agreed among themselves, they didn't dare open the debate up all over again with Germany.

"They simply said, look, with great difficulty and great costs, we've put together these terms. We've got to just give them to the Germans and tell them more or less to take or leave it. And so the Germans, who in the meantime had been preparing for the old style full negotiations, and had crates of material, arrived in Paris with all their boxes and all their positions already prepared, and found they weren't going to negotiate," MacMillan says.

The Germans were humiliated. And so the Paris Peace Conference turned into something different from what many had envisioned.

Strachan says the end of World War I was paradoxical in that sense. He says until then, the Napoleonic wars were the model - a short decisive campaign, battlefield success, and then a peace settlement.

"In the First World War that isn't how things go. There isn't a decisive battlefield success. We can't simply say, as in 1815, there is the battle of Waterloo, Napoleon is defeated, he goes into exile, there is a new regime in France and a new international order is established which lasts until 1914. What instead we have, is a much messier conclusion, no clear decisive battlefield success, and yet, we have a series of peace settlements which create a new world order, and which dictate a peace to Germany as though it had been defeated on the battlefield," Strachan says.

But of course the end of World War I didn't bring peace for long. There's been much debate over the years about whether the harsh terms of the Treaty of Versailles led to World War II.

The historians interviewed here refute the idea. It's too simplistic they say. Certainly, times were tough and certainly the bitterness Germans felt about the terms was easily manipulated for propaganda purposes. But they reject drawing a straight line between Versailles and World War II.

Strachan says there's a lesson in Versailles nonetheless - how not to treat a defeated foe.

"We have now come away from that saying, if we're in that situation in the future, we must recognize the aspirations of both sides. There needs to be a dialogue. Versailles from that point of view is seen as a warning: that you can't have a peace that treats the defeated power as Versailles seems to treat it, if you want it to be a lasting solution," Strachan says.

And if you're not careful, the losing side will manufacture victory out of defeat. It turns out, concepts such as victory and defeat are oddly mutable, particularly when it comes to memory.

In London, at the Imperial War museum, you can walk through a simulation of life in the trenches.

Terry Charman, a historian at the museum, says the way the war is remembered in Britain has led to a perception not of victory, but of defeat.

"You know, it is the suffering, the portrayal of trench warfare, the war poets, Sassoon, Owen, especially, that somehow, you know, Britain lost the First World War. And of course people dwell so much on the enormous casualty figures. So what is interesting is I think the fact that we did win the First World War," he says.

The war ended 90 years ago, but certain places will forever be defined by it.

In the Belgian town of Ypres on the Western Front, the war is everywhere here.

The countryside is saturated with graves. The shop windows display artefacts. A museum on the war occupies the old market hall in the center of town. At 8 o'clock in the evening, traffic comes to a standstill at the city's Menin Gate.

Buglers play what's known as the Last Post, in remembrance of the dead. Not just once in a while, but every single night. Here too, there's a sense that loss, rather than victory, is what pervades. It turns out the end of World War I holds more than one paradox, with consequences we still struggle to understand today.