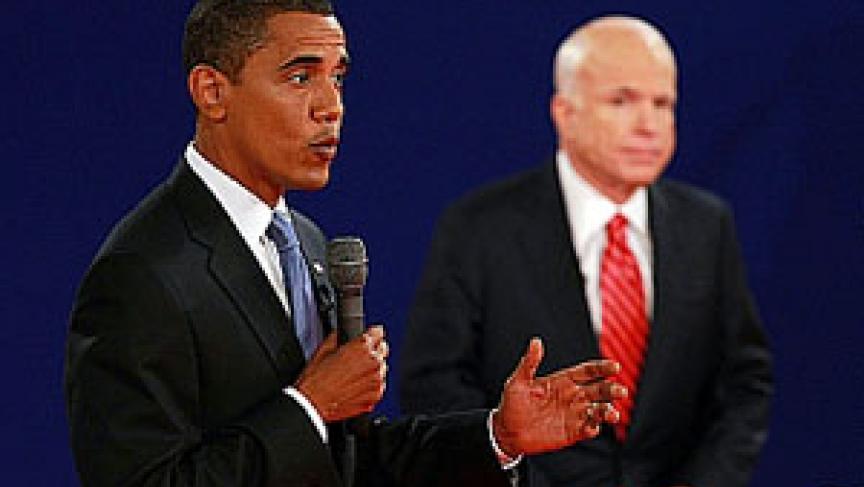 The question came from an audience member and went first to John McCain: How will all the recent economic stress affect our nation's ability to act as a peacemaker in the world.

McCain said history shows that military strength depends on economic strength: "We are peacemakers, and we're peacekeepers. But the challenge is to know when the United States of America can beneficially affect the outcome of a crisis -- when to go in and when not. When American military power is worth the expenditure of our most precious treasure."

McCain said that he understands how to make these tough decisions and Obama does not.

For his part Obama picked up from there: "It's true, there are some things I don't understand. I don't understand how we ended up invading a country that had nothing to do with 9-11, while Osama bin Laden and Al Qaeda are setting up base camps and safe havens to train terrorists to attack us. That was Senator McCain's judgment and it was the wrong judgment."

But Obama agreed with McCain that history shows that no nation can maintain its military superiority while its economy is sinking. That sentiment makes defense expert Michael O’Hanlon at the Brookings Institution uneasy. He says now is not the time to be talking about reducing U.S. peacemaking efforts around the world.

"Economy instability and hardship is going to hurt a lot of other countries, and that actually exasperates some problems. We don't want to reduce our role in trying to promote stability in a couple of key strategic zones at just this moment -- if anything the stakes could be increased somewhat because a number of parts of the world could suffer more from economic hardship and therefore be even more prone to conflict."