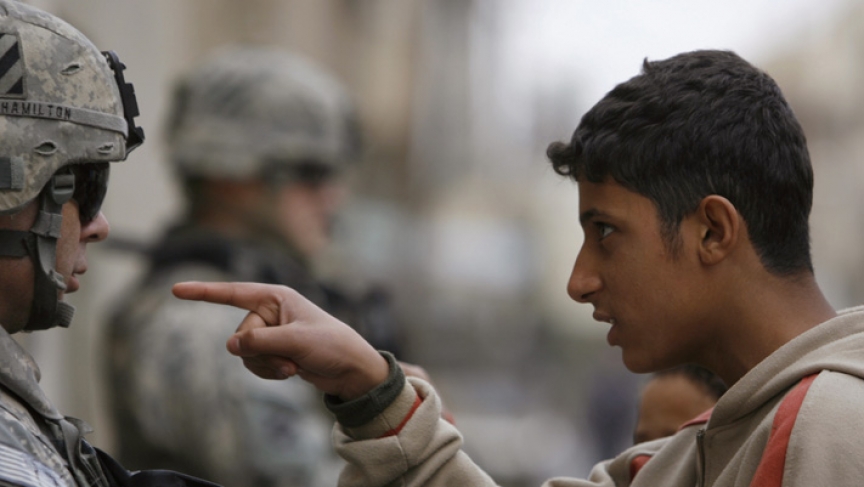 A resident gestures as he talks to a U.S. soldier from 2nd Brigade combat team, 82nd Airborne on patrol in Baghdad's Adhamiya district January 5, 2008.

In the spring of 2003 US forces invaded Iraq and routed its army. Three weeks after the capture of Baghdad, President Bush stood on the deck of the U.S.S. Abraham Lincoln and declared victory.

"My fellow Americans, major combat operations in Iraq have ended. In the battle of Iraq, the United States and her allies have prevailed."

For a brief moment many Americans bought the idea, the war was over. But why didn't the war end with the fall of Baghdad? And why were we programmed to think it might?

"A lot of Americans instinctively think of war as being a lot like a football game," says Stephen Biddle of the Council on Foreign Relations. "There's a goal, the enemy capital. Once you cross the goal line and you capture the enemy capital, you score more points than they did, you're declared the victor, the time runs out, the game ends and you go home to cheers from the adoring fans."

And of course the defeated side plays by the rules and accepts its loss.

That's because real war is about politics, not sports. It was the famous 19th century military philosopher Carl von Clausewitz who said war is an extension of politics by other means.

“What that means is that war is a way of figuring out who's going to rule and what policies are going to be adopted, and determining that outcome by a competition in inflicting and receiving violent force," Biddle says.

But appearances can be deceptive. The defeated side doesn't always lose.

"Just because I've received some violent force, if I'm not yet ready to accept your politics as opposed to my politics, I don't have to stop fighting. I can keep going. I can change the way I fight," he says.

Which is exactly what happened in Iraq. Instead of accepting defeat, the Iraqi Sunnis launched a devastating insurgency. US blunders allowed it to thrive.

Widespreading looting became the symbol of the Bush Administration's failure to plan for the aftermath of the invasion. At the time, Defense Secretary Donald Rumsfeld dismissed it as par for the course for a liberated population releasing pent up feelings. He accused the news media of exaggerating the chaos.

“I picked up a newspaper today and I couldn't believe it. I read eight headlines that talked about Chaos! Violence! Unrest! And it just was henny-penny the sky is falling, I've never seen anything like it," Rumsfeld said.

Not everyone shrugged it off. Fred Iklé was Undersecretary of Defense during the Reagan Administration. He's known among political scientists for a groundbreaking study of war termination--a book called "Every War Must End."

“You couldn't imagine General MacArthur moving into Tokyo and tolerating looting," Iklé says. "No. He had a long parade of our tanks and guns and clearly established that we had the ability to control the situation."

Iklé says not only did the U.S. fail to plan properly for the post-war period in Iraq, it was overzealous in its purging of Saddam loyalists. You want to win over the population you've conquered, Iklé says, not alienate it.

As we now know, Iraq descended into a vicious civil war. A complicated mix of sectarian groups struggled over the country's future. Prospects for an end to the conflict receded.

Those who study how civil wars end have suddenly found themselves in demand. One of them is Harvard political scientist Monica Duffy Toft.

"The most common type of ending is when one side wins so you have a military victory," Toft says. "The second most common is negotiated settlements, and that's when the two parties agree to cease hostilities and form a common government, and the third is ceasefires or stalemates. So the violence ends but the war itself we don't talk about it having ended because it could re-ignite at any moment."

Iraq of course is both civil war and foreign occupation. Its end may not fit into a neat research category. Even Toft says the end of war is ragged and unpredictable.

Toft says there is no short-term fix and that is is an incredibly messy and incredibly complicated process.

"You know there's a very famous book Every War Must End, but some don't," she says.

Nor is there always a winner and a loser. If peace does come to Iraq, it probably won't be in the form of victory or defeat, says Stephen Biddle of the Council on Foreign Relations.

“To the extent that we eventually get something that looks like an end to the violence as a whole in Iraq I think it will be because most or all of the many important actors within Iraq have come to accept less than their most ambitious, ideal political solution," says Biddle.

That's certainly true for the Americans, Biddle says, who have long since had to trade rosy visions of Jeffersonian democracy for some semblance of stability. There's been stunning progress in Iraq in recent months, but those close to the action say the gains could easily be reversed. In any case, the end for Iraqis looks quite different from the end for Americans.

"Talk to Iraqis, they see the situation as so much better today than it was, that they almost feel that it's over,"  says Daniel Serwer, direcotor of the program on Peace and Stability Operations at the US Institute of Peace. . "But of course it's not over for Americans because we're in this unnatural position of having essentially the entire fighting force of our U.S. Army tied up on the ground in Iraq. For America the war isn't over until we're out of there, until the occupation is really over, until Iraq can defend itself."

And Serwer says even if US troops do pull out in the next few years, aspects of the war will linger, perhaps for generations.

"You know, the concept of 'the end' is wrong. If what we're thinking of is the end as in the end of a movie, it doesn't happen that way," he says.

It happens in a much more ragged way. In war, true endings are hard to pinpoint.