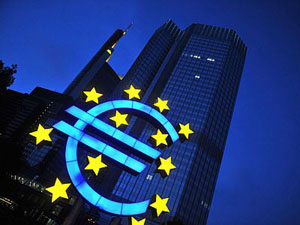 From Ireland to Iceland, European governments are taking steps to stave off their own banking disasters this week. European leaders say there needs to be a more coordinate approach, both in bailing out banks and making regulations that cross national borders.

There's talk of revamping the rules and forcing banks to accept uniform regulations across the European Union.

"The World's" Gerry Hadden has the story.

Yesterday the Irish government moved to guarantee its country banks, sparking uproar. Opponents say the Irish banks now say they have an unfair advantage over competitors. On Sunday, the Dutch, Belgium and Luxomborg governments nationalized banking giant Fortis, which operates in several countries. Then the Belgiums and the French threw $9 billion dollars at Dexia, the world's largest lender to local governments.

European leaders say Europe's entire banking system has to be overhauled, and to a degree, centralized. The European Commission President called for a Europe-wide policy for regulating banks whether they operate locally or across borders.

The EU is proposing to increase oversight of banks, especially with regard to complex assets, such as derivatives; to make insurance on deposits the same everywhere, and to make bank executives’ salaries public.