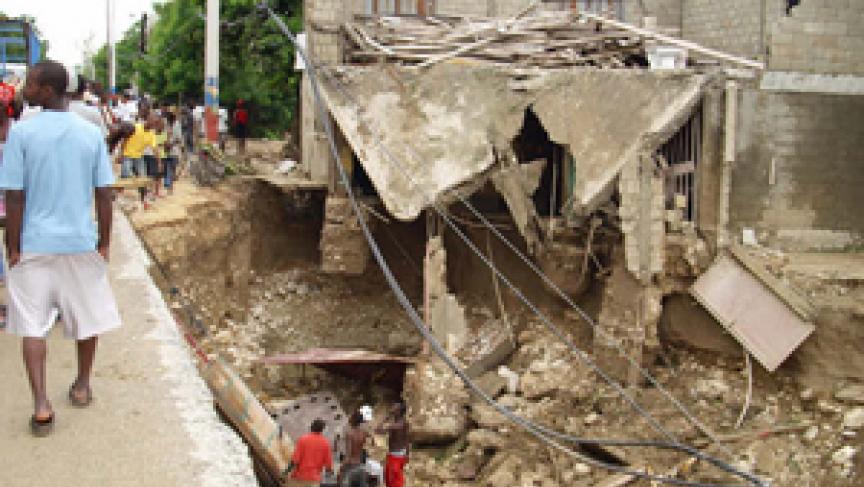 Recently the United Nations appealed for more than $100 million to help the people of Haiti. The Carribean country has been slammed by four major storms in the past three weeks.  As Haitians struggle to recover from tropical storm Faye last month, they were struck by Gustav, then Hannah, and most recently, by Ike.

The storms have left hundreds of people dead and an estimated 1 million homeless.  Many parts of the country are still under water.

Dr. Paul Farmer, co-founder of Partners in Health speaks about the floods in Haiti and their aftermath. Doctor Farmer has been providing care to people in central Haiti for more than 20 years.

"I've seen a lot of pain of individuals and families affected by terrible things.  I've seen a lot of political violence, and a lot of loss & death in Haiti.  But to go into a city several days after flooding begins and see everyone still on their roofs or wading through the streets without the kind of assistance that they need and deserve.

"It is particularly painful and I would add that if I had seen anything as painful as this, it was in the same city four years ago when 2,000 people perished after tropical storm Gene just brushed the north side of Haiti.  To see that kind of collective pain, and to know that we needed to move more quickly and we still need to move more quickly."

Dr. Farmer calls the recent disasters "un-natural disasters."  He explains, "All of the vulnerability to the bad effects of bad weather are really socially created.  So, de-forestation, policies that undermine the ability to marshall a strong coordinated response -- those are all social disasters, very much not related to the 'wrath of God' say, but to bad policies.  And, some of them have been completely outside of the Haitians' hands."

To aid the situation, Dr. Farmer offers this solution: "Let's make this a much more ambitious relief effort.  Let's not, for example, turn away a helicopter because there is not an adequate landing area.   Let's not warehouse food because we are worried about crowd control.  All of those mistakes have been made in the past.  The second thing I'd say is in the short- and medium-term are going to be rebuilding infrastructure that's damaged, thinking about housing assistance, and starting to plant trees.

"We should support democracy in Haiti--avoid undermining it in any way because one of the reasons that the institutions are so weak in Haiti is because they've gone through so much political tumult in the last couple of decades."