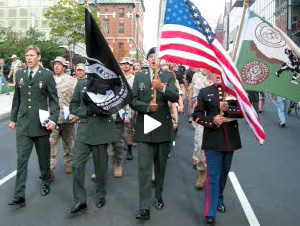 About 100 Iraq War veterans are in St. Paul to march from the Minnesota State Capitol to the Xcel Energy Center, where the Republican National Convention is taking place.

The veterans were in Denver last week to get their message to the Democrats; this week, they're in St. Paul to give Republicans a piece of their mind.

A spokesperson for the group summed up the purpose of the demonstration: "We have three points of unity: Bring the troops home now, immediately withdraw all U.S. occupying forces in Iraq; help veterans get the care that they deserve and need; and ... help Iraq rebuild their country and culture."

Iraq Veterans Against the War does not support either John McCain or Barack Obama for president; nor do they agree with either candidate's plan for Iraq.