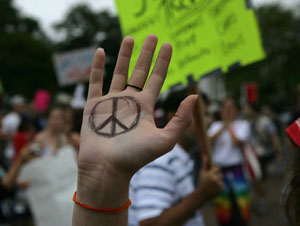 As the Democratic Convention gets underway in Denver, "The World's" Matthew Bell examines the on-going tensions between the Obama campaign and the anti-war faction of the Democratic Party.

Democrats will spend the next four days of the convention talking about how unified it is -- behind Barack Obama and against John McCain. That is a bit of an exaggeration though -- about a fourth of Senator Hillary Clinton's backers are vowing not to vote for Obama. Nor are the Democrats opposed to Obama's position on the war in Iraq.

Barack Obama opposed the war from the start, yet some anti-war Democrats say he's not anti-war enough.

Editors of the liberal magazine, "The Nation" have circulated an open letter to Obama that offers support for Obama against McCain, but it also puts him on notice: it warns against leaving too many troops in Iraq and sending more Americans to Afghanistan.