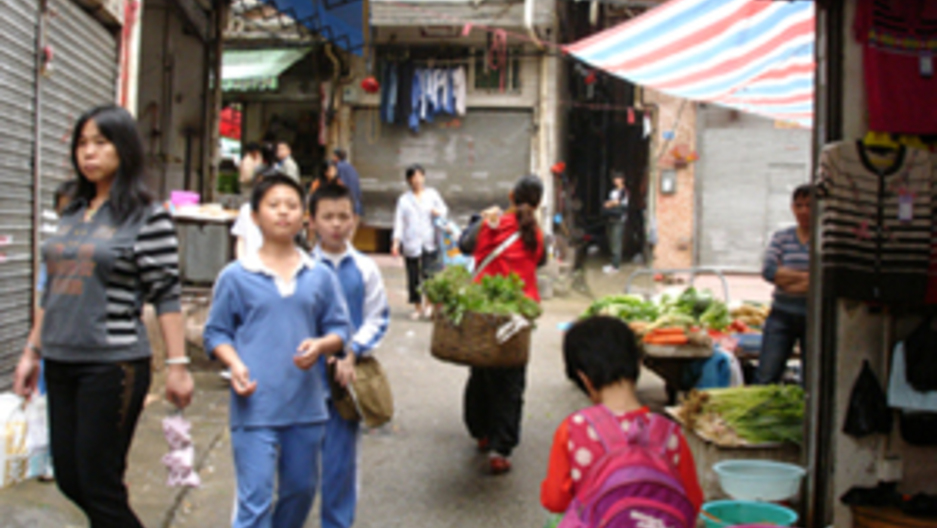 A street in Shenzhen (Image: The World)

This year, the world hit a major landmark: most of the population is now living in cities. Nowhere is that trend more dramatic than in China. Just a quarter century ago, 4 out of 5 Chinese were farmers.

Now, almost half live in urban areas - and the number's expected to grow to two-thirds within a few of decades. The United States went through a similar transformation in the 19th century. But in China, it's happening faster and on a much larger scale.

"The World's" Mary Kay Magistad begins a series on the effects and challenges of China's rapid urbanization in Shenzhen, a former fishing village turned mega-city, just across the border from Hong Kong:

It's dusk in Shenzhen, and on a street in a blue collar neighborhood where couples stroll and kids play before dinner, a couple of old friends are sitting at a small metal table outside, sharing beer and peanuts. One is a Shenzhen native. When his parents grew up here, this place was a village. One is a Shenzhen migrant, named Zhong Zhirui. He came here as a 19-year-old, in 1981, to manage his uncle's factory.

Zhong: "Back then, Shenzhen was full of yellow dirt. There were no roads or decent restaurants or decent hotels. Everywhere was yellow dirt, because so much building was going on. For example, this place where we're sitting now, when I came here, this was a village surrounded by rice fields."

Now, this former village is a dense urban neighborhood, with plenty of shops and restaurants. Zhong's wife runs one, dishing out spicy tofu and cubes of congealed pork blood. The streets are lined with what Shenzheners call "handshake buildings" - built so close together you could shake hands with someone in the one next door. They're like that because, as Shenzhen urbanized, villagers who used to farm here were allowed to keep their land. Many transformed their rice fields into apartment blocks that could earn them rent from the many migrant workers coming in. That's what the parents of Zhong's drinking buddy, Shenzhen native Zhang Yehua, did. As Shenzhen's property values have soared, these Chinese-style tenements have made their owners a fortune.