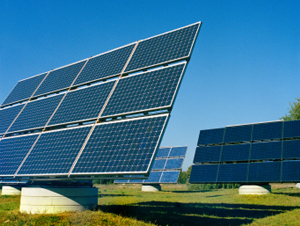 Wind, solar and geothermal are growing rapidly in the U.S., but the clean energy industry warns that growth could stall, unless Congress extends tax credits set to expire at the end of the year.

What Congress does today will set the country's energy policy for decades to come. And that also means lawmakers will chart the course for our economy and the climate. They're getting a lot of advice, especially from the CEO's of some of the biggest companies. "Living on Earth's" Jeff Young tells us those corporations don't see eye to eye on America's energy future.

Energy was at the top of the agenda when the nation's governors met in Washington. They're worried: they see soaring fuel costs, environmental concerns, and charts that show projected demand for power curving upward like a mountain with no peak in sight. They invited the leaders of major electric utilities to weigh in on what's in store.

Dominion CEO Tom Farrell was not encouraging: "I'm not an alarmist by nature. I do believe, however, that our nation is headed for an energy train wreck."

The wreck Farrell sees coming is when booming power demand bumps up against any aggressive global warming laws. Dominion has energy customers in 11 states. It's planning both a new coal and nuclear plant in its home state, Virginia. Dominion's also putting up some wind facilities. But Farrell has low expectations for alternative energy:

"We all want a clean healthy environment. But I urge you to beware of those who say we can have it for free. They are singing a siren's song."

Next, the governors heard Michael Morris of American Electric Power. AEP burns coal to generate three quarters of its electricity in the Midwest. Morris plans a new coal plant with advanced technology that could allow it to capture CO2 and store it underground. He warned against any action that would cut the use of coal:

The governors apparently got the message. They chose not to act on a modest global warming resolution by Minnesota Governor Tim Pawlenty. But the message was quite different at another energy gathering in Washington.

Tony Hayward's company, BP, helped sponsor the year's biggest gathering of government officials and renewable energy businesses. BP invested a billion dollars in renewables last year and plans one point five billion in '08, a lot of it in the U.S. BP owns the most wind power acreage and runs the country's largest solar equipment facility.

Hayward wants Washington to pass a law to put a price on carbon emissions. That would make cleaner sources, now much more expensive than fossil fuels, more attractive. Electricity from wind is now about 50 percent pricier than that from coal; solar is from three to five times as costly as coal.

A lot of companies are working to bring down those costs, including some not even in the energy business, like Google. The information technology giant recently launched a campaign that goes by an engineering formula: RE less than C –that's renewable energy less than coal.