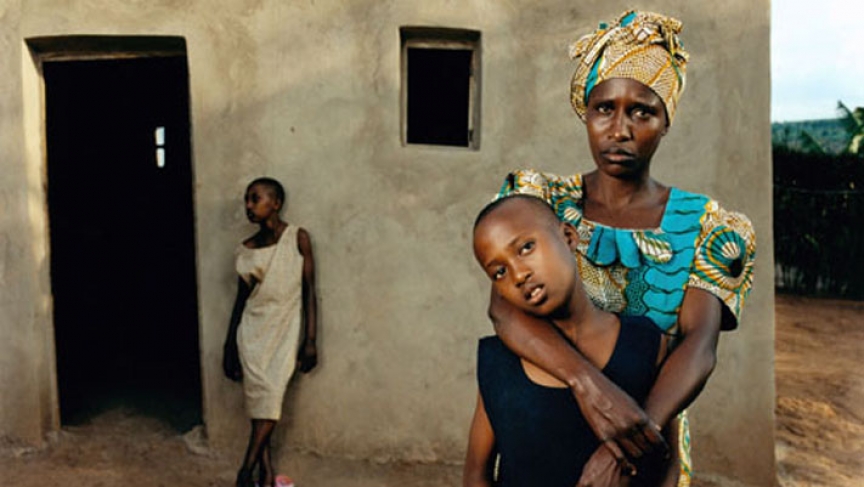 A genocide survivor and her children.

Rwanda's 1994 genocide was about more than mass murder, it was also about rape - widespread rape - mostly of Tutsi women by Hutu men.

Angelique is a 29-year-old Tutsi. During the genocide, when she was just 16, she was captured by Hutu extremists in the Rwandan capital, Kigali.  The Hutu militias were known as interahamwe, meaning "those who attack together."

"After the interahamwe took me to their home they started raping me. It was like a nightmare. At first I thought I was going to die. Later it turned out I was going to serve as their wife. I had to accept it to stay alive," Angelique says.

She was kept in Kigali for a month. Then the city was liberated by Tutsi rebels. The interahamwe  fled to what is now the Democratic Republic of Congo. The Hutu fighters took Angelique with them.

"When I got to Congo one of the interahamwe built a small house in the camp and kept me as his wife. But other interahamwe could also come and rape me there," she says.

The days and weeks stretched into months and years. One day, in her third year of captivity, Angelique pretended she was going to fetch water. She escaped. She made her way back to Kigali. But the uncle she used to live with there had been killed. She was destitute. She was also pregnant.

"I felt like I had no human value at all. I kept moving from one place to another. My only hope was God. I kept telling myself God has another plan for me," Angelique says.

Finally, a fellow genocide survivor took her in. Angelique gave birth to a son. She says she loved the baby. But he also reminded her, every day, of what she'd been through. She looked after the boy for two years, but then she became overwhelmed. Angelique gave him to a woman in her hometown three hours away. She returned to Kigali to look for work.

Her life in the city is a struggle.

She is HIV-positive. She waits tables to get by, but doesn't have a steady job or even a home. She splits her wages with the woman bringing up her son.  Not only does the boy not know who his father is, he's confused about who his mother is.

All over Rwanda there are similar stories to be found.

It's just before Christmas in Butare, southwest Rwanda. Children are gathered in the garden of a women's center. It's run by Sister Genevieve van Waesberghe of the Medical Missionaries of Mary.

"Today we are celebrating the Christmas of vulnerable children, children of the women who attend the center.  Women who are traumatized.  Women who are surviving through prostitution because of all that they have lived through during the genocide or when they were refugees. Many have been raped. The children are quite dysfunctional," Van Waesberghe says.

Among this population are children born of rape during the 1994 genocide.  They are on the cusp of adolescence. But for the most part they haven't been told their own stories. Counselors here are rightly protective of them.

But social worker Jeannette Ntawuhigimana agrees to speak about the issues they face. For a start, she says, if the child lives with its mother, the child lives in hardship.

"In general these women don't have good lives. They're very poor. Many have HIV or AIDS. Some still suffer injuries from being attacked. Psychologically they are traumatized. All these factors combine to make their lives very very hard," Ntawuhigimana says.

And they have complicated relationships with their children born of rape.

"It's hard for them to accept these children. They feel guilt. The child reminds them of the father, of what happened. Sometimes when we go and visit these women in their homes, we find the children very dirty. It’s because the woman hasn't accepted the child as her own," she says.

No one has done a comprehensive survey of these children. Advocates believe there are thousands of them, possibly 20,000 or more.  Policymakers and caregivers are reluctant to single them out. It's hard to tell how much that's a result of taboos and how much the result of an earnest desire to protect them from stigma and discrimination. Either way, they and their mothers are left isolated and invisible. Over the past couple of years, New York-based photojournalist Jonathan Torgovnik has made it his business to track these families down. He's trying to raise awareness about their plight. And he's started an organization called Foundation Rwanda to help them.

"We had to have a major outreach program to actually find them because  they do not seek help and they're ashamed of what happened to them. So we would actually send social workers to the villages to try to identify these women. They explained what my project is about and only when they agreed to be interviewed would I come and interview them and photograph them with their children," Torgovnik says.

Torgovnik has made three trips to Rwanda so far. He has interviewed 30 women. Many of them share the trauma of being rejected by their families.

"Many of their families, if they have any surviving relative, said to them you're welcome to come back, but without this child. This child, his father is a militia, the militia that actually murdered our family. We cannot accept this child in our house," he says.

Torgovnik says he asks each woman what she remembers thinking when she discovered she was pregnant.

"A lot of them would say to me, 'As soon as I found out I was pregnant I wanted to have an abortion.' Or they would say, 'I was thinking I should commit suicide. I cannot have the child of a militia. I cannot have a child who will remind me of these experiences all my life.' We don't know how many did that. Maybe they did," he says.

Torgovnik won a major prize for one of his Rwanda photographs.  In it, a mother stands in front of her modest house, her arms wrapped around her 12-year-old daughter, born as a result of a brutal rape during the genocide. In the background, slouched against the house, is a slightly older daughter, born to the woman and her husband. The husband died in the genocide.  The woman tells Torgovnik she's come to realize how much she favors the first-born daughter, and neglects the child of rape.

"It's very difficult for these women to say outright, 'I love this child.' From all the women I've interviewed, only one or two said that. Most said, 'Look we don't love them, we don't hate them, we accept them.' Some of them even said outright, 'We don't love this child.' I was pushing that question because from my impression, the time I was spending with these women, my observation is that they do love these children, but it's very difficult for them to admit it because of the circumstances of how it happened," he says.

It's also difficult for them to tell the children who their fathers are. None of the women Torgovnik interviewed has told her child the truth yet.

Angelique hasn't told her son the truth either.

Her boy is 10 now. During the school year he still lives with the woman in Angelique's hometown. During school vacations he visits Angelique in Kigali. He is starting to believe her when she explains to him that she is his biological mother. But he calls the woman who's raising him “Mommy.” Recently the boy has started asking who his father is. Angelique tells her son his father has gone abroad. She says she wants to tell him the truth when he's older. But she can't imagine telling him the whole truth. Sometimes she thinks she will just tell him his father was a soldier who died in the war. But that's for the future. Right now Angelique is plagued by worry.

"What is important to me is to figure out how to bring my son to live with me so I can look after him. All I need is to find a job and a place to rent where I can look after myself and my child," she says.

That turns out to be a tall order in today's Rwanda.