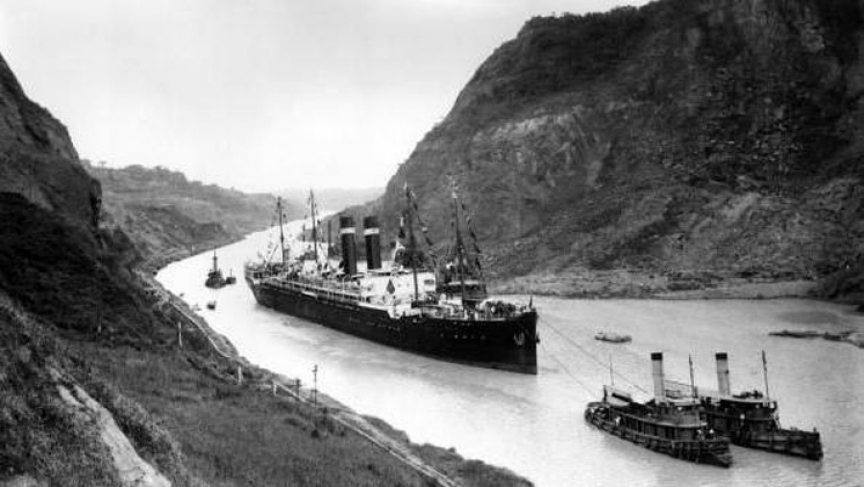 SS Kroonland is seen on 2 February 1915 at the Culebra Cut while transiting the Panama Canal. Kroonland was the largest passenger ship to that time to transit the canal.

A century ago, American engineers embarked on what was then the greatest building project in history. It took 10 years and 75,000 men to construct.

Three presidents oversaw its completion. Teddy Roosevelt called it, “the giant engineering feat of the ages.” We’re talking about the Panama Canal. Now a hundred years later, Panama is in charge of the canal. The central American country is now embarking on another major engineering project.

You might not realize it, but the reason you’re able to get fresh foods and new products on your shelves so quickly is in large part due to the Panama Canal. Fruits and grains, petroleum and coal, electronics and cars – hundreds of millions of tons of products pass through the canal every year.

The Panama Canal is a critical link for world commerce. And it’s central to Panama’s identity.

“It is very difficult to explain perhaps to someone who is not from the isthmus what does the canal mean, but perhaps what comes best to my mind, when you travel in Central America and you look at the coat of arms of the Central American countries, they have volcanoes in their coat of arms and their currencies," says Stanley Heckadon, a professor at the Smithsonian Tropical Research Institute in Panama City, and the resident historian on all things about the canal. "In Panama it’s not that way. In Panama the national coat of arms has the canal as a centerpiece. Because it does reflect its geographical destiny.”

The length of the Panama Canal, from Atlantic to Pacific, is 50 miles. Almost half of that distance it taken up by a massive man-made lake. But to reach Gatun Lake, ships must pass through narrow, winding channels.

And at both ends of the canal, ships enter three sets of locks, where boats are raised and lowered 85 feet.

The biggest ships that can enter the locks are called “Panamax” freighters. They’re named this way because ship builders know just how big they can build and still get through the canal.

Ivan Barillo, who works at the Miraflores Locks for the Panama Canal Authority, watches a massive cargo ship enter the locks. Huge doors slowly swing closed and the chamber begins to fill with water.

“106 feet beam. So there’s only 24 inches clearance to each side," Barillo tells me.

Not a lot of room.

Eight locomotives are tethered to the ship by 35,000 pound resistance cables.

The locomotives, or mules as they call them, run on tracks alongside the chambers, four mules on each side. The mule drivers communicate with the ship’s pilot using bells. The locomotives tighten and slacken their cables to make sure the massive ship doesn’t bump into the concrete sides of the lock chamber. It’s a tight squeeze, but the system works.

In the Canal Authority’s control room, supervisor Neils Hanson gazes up at a massive board with blinking lights and television monitors. He’s watching ships heading in both directions, at various stages along their canal passage.

“It’s like a chess game really, you know. You’re playing chess. Two sides. You have the Atlantic and Pacific and you’ve got 30 ships going through. And those are your chess parts, you’re just moving them around to make them work," Hanson says.

Up to 43 big ships can pass through the canal on any given day. Depending on the size of the ship and traffic, it takes about eight to 10 hours to cross from one side to the other. Hanson says, right now, the canal is near capacity and ships have to wait their turn offshore to enter. He says it can get pretty backed up.

“We’ve had up to 115 at one time, ships waiting. When we have lock overhauls, for example, where one side of the locks is shut down for maintenance, ships have gone, up to 115 ships waiting in line, which is eight to 10 days waiting to get through the canal," Hanson says.

Hanson says if a ship has to wait more than 10 days, it’s actually faster to go all the way around South America.

To ease congestion, the Panama Canal Authority is building a third lane. The new passage and locks will accommodate so-called “Post Panamax” ships. Those vessels are too wide to get through the current locks. All told, engineers expect to excavate enough land to cover an entire 18-hole golf course with a pile of rocks and dirt 350 feet high.

“It is a historical challenge. This is a big effort for a small country," says Jorge de La Guardia, program manager for development at the Panama Canal Authority.

He says, the seven-year project will cost more than 5 billion dollars. It’s a big investment for a country of three million people. But the canal is the country’s major moneymaker and the government says it needs an upgrade to stay competitive in world trade. Nearly half the ships that come through the canal travel between the east coast of the United States and Asia. But as freighters get bigger, De La Guardia says the canal is losing business.

“Right now, the Post Panamax ships go to the area of Long Beach, Los Angeles, the west coast of the United States. They unload there and then they transfer to trucks or trains and move them to Chicago and New York," De La Guardia says.

De La Guardia says the canal loses about $350,000 for each one of those big ships that doesn’t use the canal. That’s also bad for the environment. As ships chug all the way around South America, they use a lot more fuel, putting more greenhouse gasses into the air. Expanding the waterway is expected to generate 35,000 jobs. Canal officials are hoping to use home-grown labor.

The city of Colón sits on the Caribbean terminus of the canal. The original town was built to house the tens of thousands of people who came here a century ago to work on the canal. It was a hastily built place then.

Today the buildings are dirty and dilapidated. Young men and women hang out on balconies during the middle of the weekday, apparently with little to do. 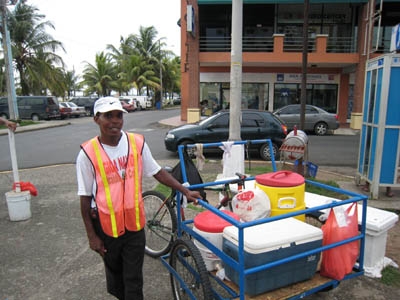 Claudio Lindo sells juices from a pushcart and says if it is really going too happen then she welcomes the canal expansion.

"Unemployment is very high here. We’re all waiting to see if the government will come through and fulfill its promise of creating lots of jobs for all the people who have applied to work on the canal expansion. There’s a lot of us here who want to work on the canal," he says.

Lindo says he himself would like to work on the canal as a carpenter.

Despite widespread skepticism and concerns about government corruption, many Colón residents are proud that their country is taking on this challenge. Most are descendants of the original canal workers.

Everaldo Jesus Cusati Flores says his grandfather came from Palermo in Sicily to work on the canal. Flores thinks the expansion will bring prosperity to Colón and Panama. And he backed up his sentiment with his vote. In a referendum last fall, he was among the 77 percent of Panamanians who voted in favor of expanding the canal.

Panamanians began thinking of their waterway as a major asset seven years ago. That’s when control of the canal passed from American to Panamanian hands.

Former U.S. president Jimmy Carter attended the historic event. He was the one who signed the Panama Canal treaty in 1977.

Here’s what Carter said at the handover ceremony on December 31st, 1999.

“Today we come together with a spirit of mutual respect, acknowledging without question the complete sovereignty of Panama over this region.”

The months preceding the handover were a time of great anxiety for everyone involved with the canal.

“There were great fears, not only here in Panama but abroad, that a canal in Panamanian hands will probably cease operating within 24 hours," Heckadon says. "However, the fact that the transition, the handover, took place seamlessly. That has given an enormous boost to Panama internally and externally. The word in Spanish is confienza, that confidence. I think that by Panama showing it can handle the canal well, and moreover that it was able to discuss the upgrading and go to a national referendum, and that it got approved, it gave the international community, investors from different countries, confidence in the country’s future.”

And that confidence is visible all over Panama, as the country prepares to expand the canal and embark on a period of unprecedented growth.