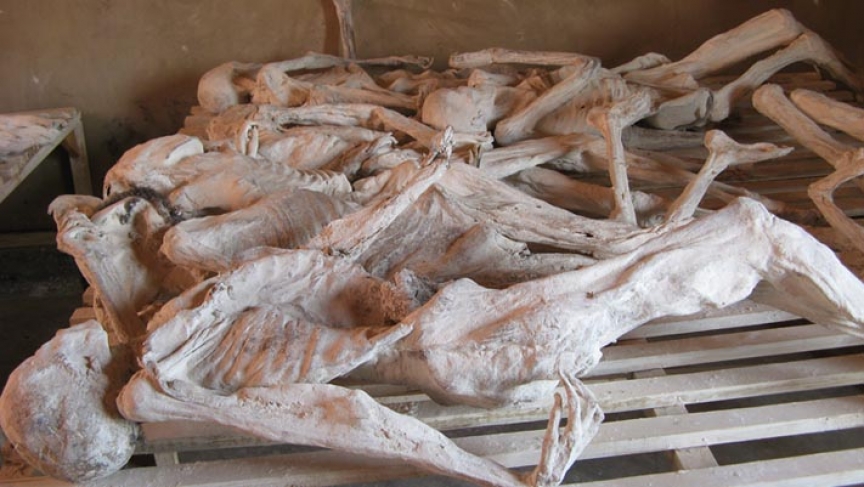 Murambi Technical School, where many victims were killed, is now a genocide museum.

Nearly 13 years have passed since the genocide in Rwanda. Changes are sweeping the African country. Makeshift courts are trying thousands of suspected killers for the crimes of 1994. President Paul Kagame is pushing an ambitious reform agenda and signs of development are everywhere. But even as Rwanda moves on, it does not want to forget. So, it's also a country of powerful, haunting memorials.

The memorial at Murambi sits on a hilltop near the town of Gikongoro in the southwest. The site was supposed to be a technical college. The campus was still under construction when the genocide began. Thousands of Tutsis sought refuge in the empty buildings. They were slaughtered there. The bodies were dumped into mass graves.

The day I visit with my translator, the place is deserted. There are two guides who work at the memorial. They catch a ride up with us from the village below. A lone dog lies in the road near the entrance. It heaves itself up and lopes off into the grass. Rolling green farmland stretches out in every direction. All you can hear is the buzz of insects.

One of the guides, Francois Rusanganwa, launches into his spiel.

"Many people, Tutsis, have been killed here, in 1994. They came here to find protection because the authorities told them to come here, to be protected," Rusanganwa says.

But it was really a ruse, according to Rusanganwa, to get the Tutsis to assemble in one place to be killed. Rusanganwa explains that a year after the massacre some of the bodies were exhumed and reburied. About a thousand were kept above ground for the memorial. I brace myself, knowing I'm about to see those remains.

We walk toward a series of low buildings that look like barracks. They were supposed to be dormitories housing students. Now they hold bones. The other guide walks ahead with the keys.

I step into the first room. The smell of decay hits me first. The dead are laid out on slatted wooden tables. The partially decomposed bodies have been preserved with lime. It gives them a chalky look. They are shrunken and brittle.

At first, I don't see individual bodies, just shapes. Then my eyes begin to focus. It's not the skeletal remains that are shocking. It's the stories that are written on those remains. You can see where machetes have sliced off limbs, where clubs have smashed skulls. You can see faces screaming in pain, upper bodies twisted in flight, hands contorted in anguish. Some torsos still have shirts on. Some hands still sport wedding bands. Some of the dead are children.

Suddenly, I realize the others are waiting for me. This room is just one of dozens. We move on. The next room is similar. And the next.

Emmanuel Murangira, the keeper of the keys, moves down the corridor opening and shutting doors. He's like a jailer doing the rounds of a cell block. Yet he is the one who seems imprisoned here. He's one of a handful of people who survived the massacre. He is gaunt and there's a bullet hole in his forehead. Frequent visitors to Murambi say he's often drunk - not today though.

Murangira must have told his story hundreds of times, but he wants to tell it again. We sit down ouside.

"When I do this particular work - like coming and showing to people what happened here - I just want to make sure that people like you, when you come and when you go back, you should tell other people that really something happened here because those who perpetrated the genocide here sometimes say that nothing happened here," Murangira says.

Murangira shakes his bunch of keys. A muscle twitches in his cheek. He recounts how he and other Tutsis from the surrounding area fled to a church in Gikongoro when the killings began. The numbers at the church swelled. Local officials, including a bishop, told the crowd to go to Murambi. Terrified, the group did so. The date was April 16, 1994.

"So on the 18th, that was when the local people came and attacked this particular area. So we tried to defend ourselves with the stones, with the bricks and then because we were so many, we were able to defeat that group so they went back. On the 21st of April, at around 3am, that was when we heard vehicles, buses, trucks, bringing soldiers, and then the soldiers kind of encircled the whole of the compound and then they started shooting at us, throwing grenades, then killing. So the killings continued all night from 3am up to around nine in the morning. So in the morning the whole compound was full of dead bodies around here. So you can see I got that bullet wound on my head that very day," he says.

"They continued the killings and when almost everybody was dead, then they started going from person to person, looking for money in the pockets, looking for good clothing they could remove, and the shoes, earrings, necklaces, and then they went into the rooms where there were women and children and then hacking them to death with machetes, axes," he continues.

Murangira says he lost consciousness. He lay amid the bodies until the following night. It began to rain. He remembers coming to consciousness, crawling out of the bodies, and walking through the valley and up a mountain. He gestures to the highest point we see to the south.

He spent three days on the mountain and watched the militias return with heavy machinery to dig graves. Then he began to walk toward Burundi, where he found refuge and medical help. His wife and five children, who were with him at Murambi, have never been found.

Francois Rusanganwa, the first guide, has been quiet all this time. He was in Burundi during the genocide. But he lost his mother and eight siblings to the massacre here. He tries to explain what it is like to work at the memorial.

"We're always here - we're always here, explaining things to people. We are always in pain, but we have no choice. We can't ask somebody who didn't lose someone here to work in such a place. So we stay. We explain what happened. And that gives us some relief," Rusanganwa says.

The guides have one more thing to show us. In a barn-like building at the far end of the complex, coarse blue rope has been strung across a cavernous space. Bloodstained clothes have been draped over the rope in rough piles. The effect is wrenching, and also beautiful.

The guides suddenly look proud, as if we are admiring artwork in a museum. It makes me realize how little the memorial at Murambi feels like a museum. It's too raw, too real, too unadorned.

I wonder how the place will change. There are plans for more exhibits, more formal displays. I wonder, too, what it will be like when the survivors are gone. For now they keep watch, they tell their story, they bear witness for the rest of us. For them the genocide might as well have happened yesterday. For them there's no flight home.

Murambi caught me by surprise. It had already been a full day when my translator Samuel Gasana suggested we pay a visit. I said OK without really focusing on what I was agreeing to. As we turned off the main road to the site I remembered what Sam had told me about the place: the mass graves, the exhumed bodies, the survivor with the bullet hole in his head who watches over the place. Back in Boston, working on the radio script, my editor asked me how I had reacted to seeing the dead. We reporters are perhaps overly trained to keep that part out of the script. But here's what I wrote in an e-mail to a friend:

"I've never seen anything like it and I can't remember feeling anything so powerful. The sensation in the first room was intensely physical. I'm not sure I can capture it in words. It was adrenalin I'm sure, but all over, prickly, and then just this heavy feeling of not being able to move while I looked at the bones. There's still a smell of decay 13 years later-not a stench but strong enough to catch the nostrils and bring you up short. At first even though I knew what was surrounding me I couldn't really look. But as I stood and waited the details came into focus. Right down to the wedding bands. Eventually I was able to take some photos, which felt very strange but also necessary given that I was supposed to be working, documenting, remembering."

I remember feeling caught between my own reaction and my reporter's duties. Had I been simply another visitor I think I would have broken down in that first room. Instead I worked.