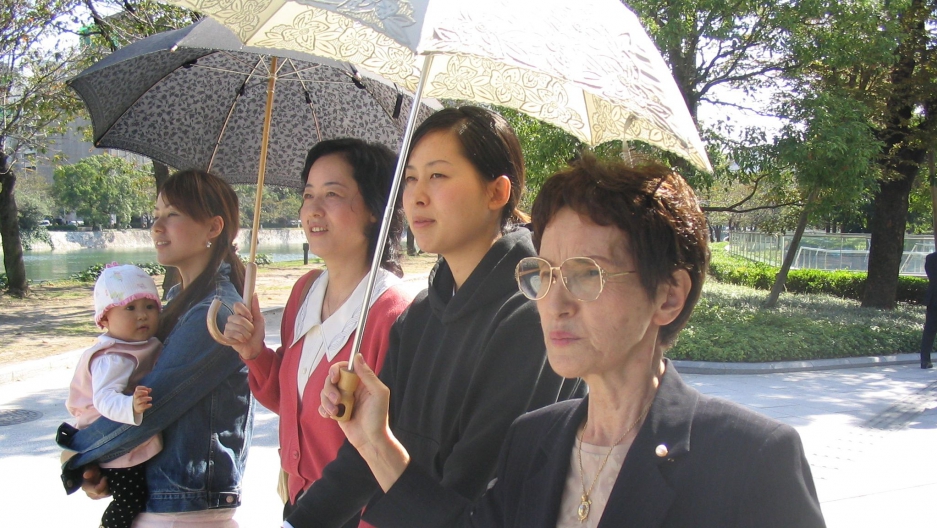 From the archives: This is the first of a four-part series published in 2005 on the lingering mental health effects of the atomic bomb.

Until recently, Hiroshima survivor Sueko Hada was silent about her ordeal.

"I didn't talk about it, at least not publicly,” Hada says. “But I would watch the commemoration on TV with my children every August 6 and I'd talk about it a bit then. No details, though."

But, like many survivors, Hada feels time is running out. She feels increasingly compelled to tell her story.

A flash of intense light

On August 6, 1945, Hada was living with her parents and her four older sisters in a house that was barely a half-mile from where the bomb hit. She was 7. On that morning, her parents had already left the house to go to work. She and sisters were eating breakfast.

Suddenly there was a flash of intense light, followed by an explosion. That's all Hada remembers; she lost consciousness. When she came to, she found herself trapped under a collapsed wall.

"I managed to claw my way out from under the rubble," Hada says. But her sisters remained trapped. By then, the house was on fire, and the cries of my sisters were getting fainter.

"I left to look for help. " Hada said. "When I went outside, I saw that everything had totally changed. Although it had been a beautiful morning, it looked like twilight now. Everyone was injured. No one was offereing help, people just looked after themselves."

Hada herself was bleeding from a neck wound. There was blood all over the white clothes she was wearing. She wanted to return to the house, but got disoriented.  The familiar landscape of her neighborhood had totally changed. The only thing she could do was follow other injured people.

"Still, to this day, my sisters' voices haunt me," Hada says. I can hear them saying 'Please call for help!' That's the most painful thing — that I ran away from my sisters. I've felt guilty about this since that day. I'll feel guilty as long as I live. I will never be happy."

Sueko Hada never saw her sisters again. She herself was in a daze, utterly unable to comprehend this new world inhabited by strangers.

"I didn't recognize anyone," she says. "All I could do was follow the others. I saw terrible things. There were people with eyeballs hanging out of their sockets. There were others whose cheeks had been ripped open from the corners of their mouths to their ears. I saw a young mother running with a headless baby on her back. I saw someone else with his belly ripped open and intestines spilling out. Most of these people looked like ghosts. It truly was a vision of Hell." But pretty soon, she got used to seeing these things. "Everyone did."

Hada eventually made it to a makeshift camp outside Hiroshima. She stayed there for a few days. "More and more injured people were being brought in every day. I just waited there, always hoping that my parents would come to pick me up." But then, suddenly, the refugee camp was shut down because the Japanese military thought it would be targeted in air raids.

"I had nowhere to go,” she goes on. “A soldier took pity on me, gave me some money and told me to take the train to his grandmother's house. But on the train a woman stole all my belongings."

"A Buddha in Hell"

Finally, someone else offered to take her to her elementary school. There she met one of one her teachers. He'd returned to the school to look for missing students. It was the first time since the A-bomb hit that she had come across anyone she knew. "When I saw him, I felt as if I met a Buddha in Hell," she says.

Soon Hada learned that her parents hadn't survived. Her entire family had been wiped out by the bomb.

She grew up quickly after that. She knew she was on her own.

Hada was raised by relatives. “It was very hard for them, especially after they had a baby," she says. "I knew they had to reduce the number of mouths to feed." Soon after, a man offered to take her as his wife. They married the month Hada graduated from junior high.

She had children, but she was often distant from them. Only rarely did she talk about what she'd been through. "Even though he was little, my son cried when I told him my story,” she says. “He cried and said, 'I'm so sorry, Mom.'"

Generally, though, she didn't want other people to know she was a Hiroshima orphan. "It wasn't respectable," she says. Also, many Japanese believed that radiation sickness, which afflicted many survivors, was a contagious disease. "I know many other survivors who have concealed their past from friends and neighbors," she says.

Hada no longer conceals her past. She even talks about her health problems, often the most sensitive issue for A-bomb survivors. She has had many illnesses. In 1987, doctors told her she wouldn't live five more years.

Sueko Hada hasn't exactly come to terms with her life story, but in the short time she has been retelling it publicly, she feels she is starting to make sense of it. She is speaking out now as much for her family members as for anyone else. Hada's 23-year-old granddaughter Yuko says that she, like all children in Japan, learned about the A-bomb at school. But lectures in class don't compare with hearing it directly from your own grandmother.

Yuko's older sister Yoshiko says she now feels she has inherited her grandmother's memory. Holding her own infant, named Luna, she says it's her responsibility to pass it on to the next generation.

Luna is a delightful surprise for the 67-year-old Hada. "I always thought I would die in my 40s," she says. "I never imagined that I would be able to see my great-grandchild.”

Light moments like this are rare for Hada. They are punctuated by darker observations. Contentment gives way to foreboding: "Today, I'm so grateful to see my family living in happiness," she says. "But I get nervous because I was at the height of my happiness the day before the bomb was dropped. Our family had a meal together for the first time in four months. And then the next day, my life was destroyed."

There is enough tragedy in Hada's story for an entire generation. But hers is just among many thousands of heartbreaking life histories. Other survivors of Hiroshima and Nagasaki use strikingly similar words and images in their descriptions: a living hell populated by ghosts. Like Hada, many survivors are unable to forget these memories or to feel happy. Like her, they worry that radiation remains in their bodies.

Akiko Naono, whose aunt survived Hiroshima, recently compiled the stories of more than a hundred survivors in a book.

"Every time I talk with hibakusha [literally, "bomb-affected people"], I feel so much pain, because, in a way, they are reliving their trauma again,” she says.

But many survivors feel they have to do that now. They're concerned that their stories will die with them, and that their suffering will have been for naught. So, they're speaking of their experiences for the very first time. Akiko Naono: "One aged hibakusha told me, 'Now I've told you my story, I can die in peace.'"

The story told. The memory preserved.