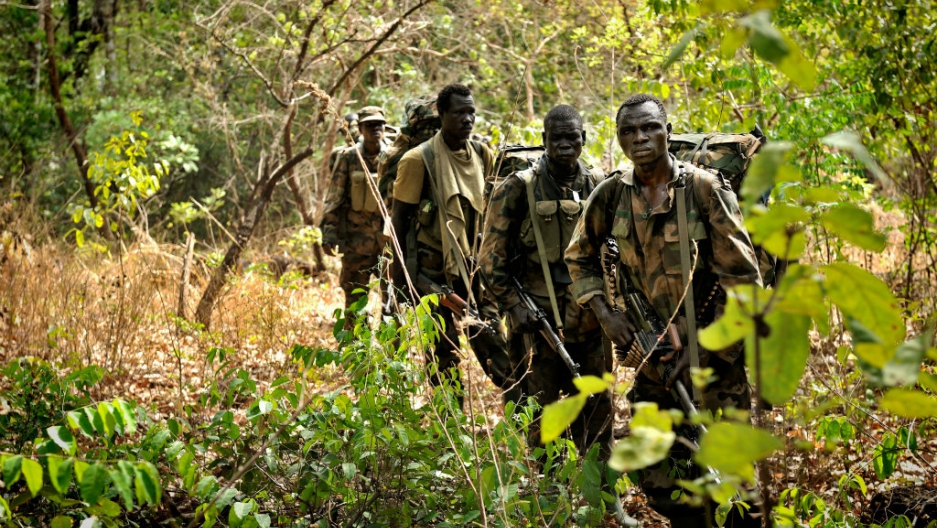 Ugandan soldiers patrol the central African jungle during an operation to fish out notorious Lord's Resistance Army (LRA) leader Joseph Kony. The unit is one of several dozen Ugandan army hunting squads -- backed up since late last year by 100 American special forces troops -- searching for any traces of the brutal rebel group in an inhospitable 400-kilometre stretch in the far eastern corner of the Central African Republic.
Credit: Stringer
Share

The US State Department has announced it is offering up to $5 million for information leading to the arrests, transfer or conviction of the Lord’s Resistance Army (LRA) leader Joseph Kony, two of his top lieutenants, Okot Odhiambo and Dominic Ongwen, and Rwandan rebel leader Sylvestre Mudacumura.

The four men are accused of committing war crimes and crimes against humanity. The LRA has kidnapped children across Uganda, the Democratic Republic of Congo, the Central African Republic and South Sudan and forced them to fight. Mudacumura, military commander of the Democratic Forces for the Liberation of Rwanda, has ordered attacks on civilians.

“We know that rewards have a proven track record of generating tips that help authorities find fugitives and hold them accountable – just look at the example of criminals and butchers from conflicts in Sierra Leone, the former Yugoslavia, and Rwanda, all brought to justice in part through the use of rewards,” Secretary of State John Kerry wrote in a Huffington Post blog post announcing the bounties.

The State Department’s War Crimes Rewards Program was recently expanded to allow the secretary of state to offer rewards for war crimes suspects sought by any international tribunal, including the International Criminal Court and new courts that may be established in places such as the Democratic Republic of Congo or Syria, Ambassador-at-Large for War Crimes Issues Stephen Rapp said in a briefing on Wednesday.

Previously, the secretary of state was permitted to issue bounties for only people indicted by the three international tribunals that were created for the former Yugoslavia, Rwanda and Sierra Leone.

“To be clear, this is not a dead-or-alive bounty program,” Kerry wrote in the Huffington Post. “We want these men to look into the eyes of their victims and answer for their actions.” Informants’ names will not be released, he added.

The bounty for fugitive warlord Joseph Kony, who’s believed to be hiding in the Central African Republic, could restart the stalled search for him.

Washington's chief ally in hunting down Kony said it was taking the actionbecause of a "hostile" attitude from host country the Central African Republic.

More from GlobalPost: Kony 2012, one year later: Success or failure?

Uganda has since confined its Kony hunting force to bases alongside their US advisors.

Offering bounties is nothing new — the tactic is being deployed with increasing frequency in Africa. Leaders of the Somali jihadist group Al Shabaab have been targeted as part of the Rewards for Justice program (its leader is worth $7 million, while an infamous 'American jihadi' would fetch $5 million) as have Congolese militia leaders, including Bosco "The Terminator" Ntaganda, who handed himself over to the ICC last month. It's not believed his $5 million bounty was collected.

It remains unclear how successful such bounties may prove, but they are an increasingly common part of the toolkit in US efforts to bring fugitives to justice.