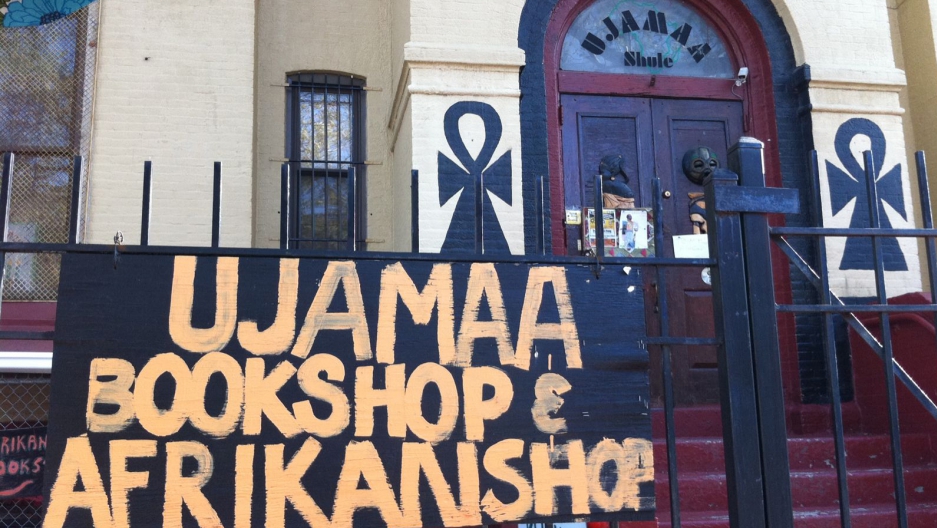 Ujamaa Bookstore in Washington, DC. "Ujamaa" is a Swahili word that means extended family, brotherhood, and socialism. It is also one of the seven principles of the African-American holiday of Kwanzaa.

You may recognize this phrase. You may even find yourself humming an earworm of the same title from Disney's "The Lion King."

"It means no worries" goes the song lyric.

Disney fails to mention that "Hakuna matata" means "no worries" in Swahili. The language — known as Kiswahili in East Africa — has its roots in a small tribal Bantu language spoken along one strip of Africa's eastern coastline. But these days, it has spread across the African continent.

Experts estimate Swahili is spoken by more than 100 million people. To put it another way: More people speak Swahili than Korean or Italian.

This week on the podcast, reporter Daniel A. Gross investigates how Swahili became such a prominent language on the African continent, and increasingly around the globe.

00:25 Hakuna matata means “no worries” in Swahili. Disney borrowed many Swahili words for the film "The Lion King."

1:10 Swahili is spoken by more people than Korean or Italian

2:32 Looking at a map of Africa with Professor Aldin Mutembei at the University of Dar es Salaam in Tanzania. Mutembei points to all of the countries that speak Swahili

4:05 A hundred million speakers of Swahili. How did Swahili spread across the continent?

College student and poet Leija Farr first started learning Swahili through celebrating Kwanzaa. "Kiswahili is such a welcoming language...I just think there's so much love around the language."

4:42 In the 19th century Swahili became the official language of Germany’s East African colony, what is now Tanzania

5:00 After World War I Germany lost control of its colonies and its east African colony fell into the hands of the British

5:36 The British standardize one particular dialect of Swahili, Unguja, which was spoken on the tropical island of Zanzibar

6:56 Swahili is not Mutembei’s mother tongue. He grew up in a village that spoke the language Haya

7:30 For Mutembei Swahili came to symbolize the wider world

8:40 F.E.M.K. Senkoro teaches Swahili in Namibia. He’s not from Namibia — he’s from Tanzania — and he’s come all this way because he wants to spread Swahili across Africa. He believes it has the power to bring Africans together.

9:37 One reason that Swahili has easily spread across Africa is that Swahili feels familiar. Swahili is part of the Bantu language family so similar languages are spoken across a huge swath of the continent

11:33 “If Kiswahili were to triumph and other languages were to die because of Kiswahili, I wouldn't mind,” says Senkoro, “For me that would be a plus, it would be a victory of Africa.”

12:20 As for Mutembei he’s afraid of the fate of his village language Haya. He’s currently writing a grammar so that he can teach his own children his mother tongue

12:48 As Swahili has expanded into countries that never used to speak it, the language has turned into something like a movement. During the apartheid era in South Africa, liberation fighters in exile learned Swahili. And recently, it became an official language of the African Union. It even spread outside of Africa.

15:00 This year marks the 50th anniversary of Kwanzaa. Read more about Farr’s memories of Kwanzaa, and her passion for Swahili, in the KUOW series RadioActive

18:07 According to Farr, in Seattle the community of people celebrating Kwanzaa and learning Swahili is growing

19:15 Hakuna Matata by the Swahili Nation

19:31 You can reach reporter Daniel A. Gross on Twitter @readwriteradio or Tweet at Patrick Cox and Nina Porzucki @lingopod